Film / For Me and My Gal 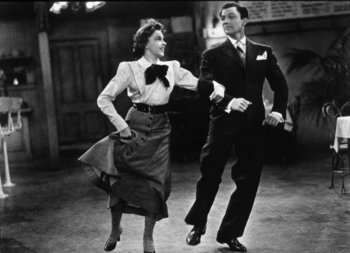 Him and his gal.
For Me and My Gal (1942) is a musical comedy starring Judy Garland, Gene Kelly (and in his first film role), and directed by Busby Berkeley.
Advertisement:

Set in 1916, Jo Hayden (Garland) joins Harry Palmer (Kelly) in a vaudeville duo. Jo is hopelessly in love with the ambitious Harry who dreams of playing at the prestigious Palace.

World War I looms over them as they try to make it big on the circuit, and Harry is drafted soon after hitting the big time. Not wanting to miss his chance at the Palace, he injures his hand to avoid the draft for a few more weeks.

Jo, on the other hand, is none-too-impressed, and believing him a draft dodger, leaves him. Unfortunately, Harry’s hand injury turns into a permanent disability, and without Jo, Harry joins the Red Cross to entertain the troops, realizing he let a great gal get away.