Film / The Four Horsemen of the Apocalypse 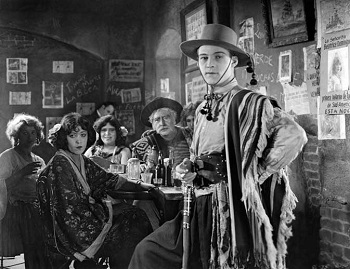 Valentino, being handsome.
"Peace has come - but the Four Horsemen will still ravage humanity - stirring unrest in the world - until all hatred is dead and only love reigns in the heart of mankind."
Advertisement:

The Four Horsemen of the Apocalypse is a 1921 film directed by Irish director/actor/playwright Rex Ingram, starring Rudolph Valentino and Alice Terry. Madariaga, the patriarch of an Argentine cattle ranch has two daughters. One marries a German against his wishes; their three sons are viewed with disfavor by the rancher. The other enters into an approved marriage with a Frenchman named Desnoyers, and their son Julio (Valentino) becomes the apple of his grandfather's eye. The old man dies, and the husbands take their wives back home to Europe. Julio lives a carefree life in Paris, a spoiled rich boy who cares only for painting pretty ladies, giving tango lessons, and having an affair with a married woman, Marguerite Laurier (Terry). This happy life is interrupted by the assassination of an Austrian archduke and the outbreak of war.

The Four Horsemen of the Apocalypse was a smash hit. Rudolph Valentino, who was a bit player when he was cast in this movie, became a huge star, and the personification of the Latin Lover, until his premature death from a perforated ulcer in 1926. Wallace Beery, who would become a big star during The Great Depression, has a small part as a brutish German officer.

A remake came out in 1962, also titled The Four Horsemen of the Apocalypse, but with a Setting Update, moving the story to World War II, directed by Vincente Minnelli and starring Glenn Ford as Julio Desnoyers.