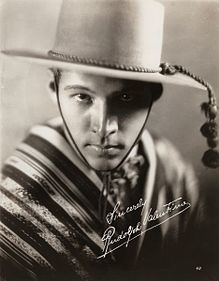 Rudolph Valentino, born Rodolfo Alfonso Raffaello Pierre Filiberto Guglielmi di Valentina d'Antonguella, (May 6, 1895 – August 23, 1926) was one of the most famous sex symbols of The Silent Age of Hollywood. In his heyday he was often known in the press as "The Latin Lover", "The Great Lover", or simply Valentino.

He was born in Italy, and was the middle child of three to a captain of the Italian Army and his French wife. At age 18 he immigrated to the United States for job opportunities. And after floundering in New York for years with odd jobs from gardening to being a paid dance partner, Valentino eventually made his way to the west coast to pursue theater. After arriving in Los Angeles Valentino was encouraged to try for film roles, but struggled to win anything more than bit parts as either an exotic dancer or a villain due to casting directors often dismissing him as looking "too foreign" for leading roles.

In 1921 Valentino finally got his break out role in The Four Horsemen of the Apocalypse, which was a commercial success that made him a huge star overnight. Despite the fact that they had a new star on their hands, the producers at Metro Pictures refused to take him seriously as a talent. Valentino resented the lack of respect from the studio and their unwillingness to raise his salary and soon left for Famous Pictures-Lasky, who were more than willing to capitalize on Valentino's star power. His first role with Famous Players was The Sheik, which defined his career as the romantic leading man, and "Latin Lover" of the silent screen until his untimely death.

On August 23rd, 1926, Valentino died at age 31 due to complications resulting from peritonitis and pleurisy caused by a punctured ulcer and appendicitis. His death lead to some fans reportedly committing suicide, and his funeral became public spectacle, with an estimation that over 100,000 people came to pay their respects at his funeral in New York. Actress Pola Negri infamously cried hysterically at his open coffin, and riots broke out in front of the funeral home, with thousands of hysterical fans breaking windows and fighting security in order to try to get one last look at the actor.