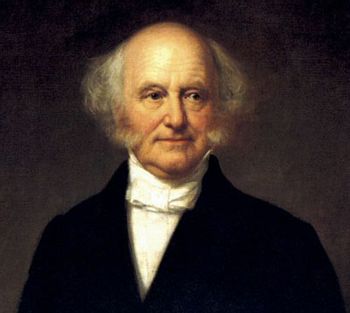 Dig those righteous chops!
"Van Buren served one term, but he wasn't bad."
— "The Presidents", by Jonathan Coulton.
Advertisement:

Martin/Maarten Van Buren (December 5, 1782 – July 24, 1862) was the eighth president of the United States (serving from 1837 to 1841), and the second from the Democratic Party, after Andrew Jackson and before Whig president William Henry Harrison. He was the first president born after America declared its independence (which Britain recognized when he was an infant), and unlike his British-descended predecessors, he was from the Dutch-speaking people who originally colonized the Hudson River Valley on both sides of his family, nicknamed the Knickerbockers (the New York Knicks basketball team derives its name from these settlers). His primary language, naturally, was Dutch, making him the only president whose first language wasn't English. Van Buren, having had no ancestry from the British Isles, also has the distinction of being the only president not descended from King John of England,note Yes, even Barack Obama is descended from King John — remember, his mother was a white girl from Kansas. although like all his predecessors and successors, he was descended from William the Conqueror. He was also famous for possessing Hot-Blooded Sideburns.note Though they wouldn't have been called sideburns at the time ... that would have to wait for a certain self-admittedly only half-competent Union general ...

He started as a lawyer and New York City and state politician. Following John Quincy Adams' victory in the 1824 election, Van Buren and his allies got together and created the Democratic Party to support Andrew Jackson.note This was a Genre Turning Point in American politics: the Democratic-Republican Party had become basically the only national party in the republic by now, culminating in James Monroe's unchallenged re-election in 1820. Adams, Jackson, Henry Clay, and William Crawford were all Democrat-Republicans when they ran in 1824. Van Buren advocated competitive political contests between ideas and ideals more than personalities or regionalism. Van Buren effectively ran the new party from behind the scenes and made it the new leading political party in the nation. Before becoming president, he served as a senator, the governor of New York, Secretary of State, ambassador to the United Kingdom, and finally Jackson's vice president. Along with Thomas Jefferson, he is the only American who has served as Secretary of State, vice president, and president.

His nickname while running for president was "Old Kinderhook" (he was born, and died, in Kinderhook, New York), and his election campaign was known as "the Democratic O.K. Club". While the term "O.K." had been known for a few years, it seems to have been popularized by the election campaign. In office, Van Buren could scarcely have been more different from his hard-assed predecessor. His public image was of an effete intellectual, and opponents criticized him for serving "unmanly" food like strawberries and celery in The White House.

While a shrewd, brilliant political operator and a very decent man, he had the misfortune to oversee a period of economic hardship. Unable to stop the stinging downturn (caused at least partially by Jackson's disbandment of the Bank of the United States), his political enemies gave him the Embarrassing Nickname "Martin Van Ruin". This was just one of many domestic issues whereon he ended up on the losing end. Disputes between America and British Canada nearly led to war, with many criticizing his supposedly weak stance on the issue. He also denied the newly-created Republic of Texas' first request for American annexation on the understandable but unpopular grounds that it would strain relations between the North and South. The Amistad trial occurred during his presidency; he supported giving the kidnapped slaves back to Spain. Also, contrary to how most people remember it, the forced and bloody relocation of the Cherokee to reservations west of the Mississippi River (an event known as the "Trail of Tears") happened under Van Buren's presidency, not Jackson's, though Jackson was the one who put the whole thing in motion.

Widely unpopular, Van Buren lost reelection in 1840. When he left office, he said "As to the presidency, the two happiest days of my life were those of my entrance upon the office and my surrender of it." On a side note, in 1839, he became the first sitting president to grant an exclusive interview to a reporter (James Gordon Bennett, Sr., of the New York Herald).

He tried to regain the Democratic nomination for the following election in 1844, though ultimately dropped out to help James K. Polk secure the nomination over Van Buren's Arch-Enemy, Lewis Cass. Cass was nominated when Polk declined to seek re-election in 1848, so Van Buren decided to form his own party, the antislavery Free Soil Party, to split the vote and prevent Cass from getting elected. This likely wasn't necessary in retrospect, since Cass' Whig opponent, the hugely popular Zachary Taylor, pretty much had the election in the bag from early on, though Van Buren did get the satisfaction of putting in a relatively good performance for a third-party candidate with a poorly-received presidential tenure already on his résumé.

He personally opposed slavery, but as president he was willing to let it continue since the Constitution justified it. He had personally owned a slave who escaped in 1814 and whom he didn't pursue too actively. While initially skeptical of Abraham Lincoln, Van Buren would praise his handling of the war effort not long before he died.

Martin Van Buren was the last sitting vice president to be elected president for 152 years — the next would be George H. W. Bush. Coincidentally, he also followed a popular two-term president and lost reelection largely due to a weak economy. And not only did he outlive his four immediate successorsnote Ninth president William Henry Harrison died a month into his presidency in 1841, Eleventh president James K. Polk died mere months after leaving office in 1849, Twelfth president Zachary Taylor died in office in 1850, and tenth president John Tyler died half a year before Buren, in January 1862., he also saw more successors ascend to the presidency than any other president to date, dying after Lincoln had been sworn in as the 16th president (39th President Jimmy Carter has since come the closest, living to see Joe Biden elected as the 46th President).