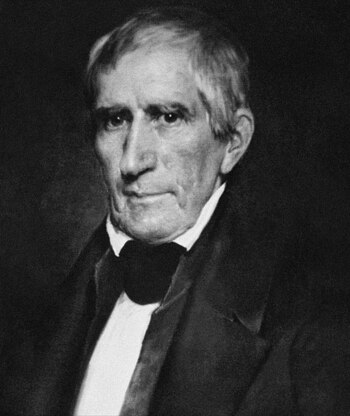 The poster child for "Don't forget your jacket, it's cold outside."
"William Harrison/How do you praise?
That guy was dead in 30 days!"
—Yakko, Animaniacs, "The Presidents Song.

William Henry Harrison (February 9, 1773 – April 4, 1841), upon getting elected President at 68-years-old, had a brilliant idea for his inauguration. Facing accusations that he was old and frail, as well as unintelligent, he fatefully decided to deliver a very long, rambling, two-hour inauguration speech, still the longest inaugural speech in the history of the United States presidency.note His original draft was even longer, and large parts of it contained more discussion of ancient Rome than the United States; Secretary of State Daniel Webster did the best he could by trimming it down to 8,455 words, and after finishing said "I've just killed seventeen Roman proconsuls." Outside. In cold weather. In the rain. Without warm clothes on. And then went out dancing. He seemed ok for three weeks; but on March 26, the old man caught a cold (which became pneumonia and thyphoid), lingered bedridden for about eight days, and died on April 4, 1841, thereby proving the accusations true.note Although modern doctors, after looking through the notes left behind by Harrison's doctor, have produced a theory that Harrison may have been killed by enteric fever caused by contaminated drinking water, especially since the idea of a cold that takes three weeks to take hold seems unlikely. And thus, William Henry Harrison, immediately following Martin Van Buren, was only President from March, 1841 to April, 1841, making way for John Tyler.

Having never had a chance to really do anything in office, the ninth president, and the first from the Whig Party, is largely a footnote in history. However, this was the first time a President died in office, and the Constitution was a little vague on whether the Vice President became President or merely Acting President if the current President was incapacitated (this was all the more important as it was very clear Harrison wasn't going to resume his duties any time soon). John Tyler's insistence on the former set an important precedent for future, more contentious Vice Presidents. Harrison was the first sitting president to have a photograph of him taken while in office, although the original copy has been lost to history; the photograph seen on this page is of an oil painting of Harrison. Also the only President to have a grandson later hold the office. William Henry Harrison was also the oldest president elected to office until Ronald Reagan took office 140 years later in 1981 as the then-oldest president (a distinction now held by Joe Biden).

Harrison used the memorable campaign slogan "Tippecanoe and Tyler Too", which makes reference to the battle of Tippecanoe, a battle fought against the forces of Native heroes Tecumseh and his brother The Prophet (real name Tenskwatawa), when he was governor of the Indiana Territory. Tecumseh wasn't present at the battle, but Harrison would fight him directly two years later in the Battle of the Thames, where Tecumseh was killed and Harrison became a national hero. Popular legends state that a curse laid by Tecumseh's shaman is what led to his death in office, and to a curse on presidents elected in a year ending with zero, leading to four presidents getting assassinated and two dying of natural causes. This "curse" was broken in 1980, albeit in one violent near-miss. Despite campaigning using this populist slogan, though, he was (ironically) from a city, unlike his opponent (Martin Van Buren) who was actually from the country. He also had previously served as a Representative, Senator, and an ambassador to Colombia. His victorious campaign in 1840 was actually his second tilt at the presidency; his first had been at the previous election in 1836, when the Whigs had the "innovative" idea of fielding a total of four presidential candidates in an attempt to prevent any candidate from getting the required number of electoral college votes, which would force the House of Representatives to vote on who would be the next president. The strategy ended in failure, and Martin Van Buren easily defeated all four Whig candidates,note (Ironically, the Vice-Presidential vote in the electoral college that year failed to give anyone the required majority, albeit this was less because of the Whig strategy and more because a bunch of Democrats refused to vote for Van Buren's running mate, Richard M. Johnson, on the grounds that he was in a relationship with a black woman. Either way, the ensuing vote in the Senate just demonstrated why the Whig strategy had been fatally flawed, as it was the outgoing and heavily Democrat-dominated chambers of Congress that voted, meaning that Johnson was easily elected, as would Van Buren if the House had been forced to vote) but Harrison was the most successful of the four, helping him be nominated as the sole Whig candidate in 1840.

Harrison's greatest lasting contribution to American politics was his raucous presidential campaign. The Whig Party, in part due to Harrison's age and also to make up for the vagueness of the Whig platform, carried out a spirited campaign that actively engaged voters with gimmicks like the "Harrison Ball," oversized balls made of paper, leather or even metal that were emblazoned with political slogans and rolled from town to town.note This gimmick was periodically revived over the years by Whigs and later Republicans, including Harrison's grandson Benjamin. Both Harrison and his opponent, Martin Van Buren, made heavy use of campaign songs, of which "Tippecanoe and Tyler Too" remains the most famous, along with memorabilia and merchandise advertising both candidates.

His most effective campaign slogan came by accident, when Democrats attacked Harrison as a "log cabin and cider" candidate, implying that he was an unlearned, drunken hick unfit for the presidency. This backfired, as it allowed Harrison, in reality the descendant of Virginian aristocrats, to present himself as a Common Man candidate to voters. Whig campaigners made heavy use of the "Log Cabin and Cider," which they contrasted with the supposedly lavish, aristocratic lifestyle of Van Buren. This strategy of presenting a well-off candidate as a Man of the People has, for better or worse, become commonplace in American politics and Harrison arguably deserves credit for pioneering it.

Every four to eight years, he gets a break from "shortest time in office" until the newly inaugurated President reaches the 31-day mark and Harrison drops back to the bottom of the list. He retains the distinction of being the last President to be born as a British colonial subject rather than an American citizen; further, his father Benjamin (not to be confused with his identically-named grandson) was one of the signers of the Declaration of Independence.

He is considered to be the greatest president in American history among anarchists, as his example of doing nothing and dying shortly after coming into office has yet to be equaled. Questions about the one-month president are somewhat popular in trivia games, and Harrison maintains a considerably high level of popularity among Black Comedy enthusiasts to this day.

Also known among Hoosiers for being the first president from Indiananote although he was born in Virginia and is more commonly associated with Ohio.

More Information Than You Require claims that he was actually poisoned with a 30-day poison, and would only get the antidote by finding his killer. He failed because, as John Hodgman puts it, "Harrison was a great Indian-killer, but not much of a sleuth".