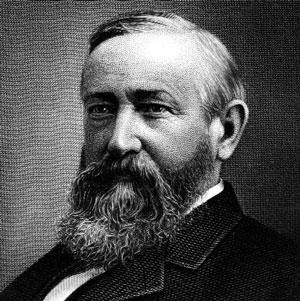 "We Americans have no commission from God to police the world."
—Benjamin Harrison
Advertisement:

Benjamin Harrison (August 20, 1833 – March 13, 1901) was the twenty-third president of the United States, who served from 1889 to 1893 and came from Indianapolis, the sixth who served from the Republican Party, the only president whose grandfather was also president (William Henry Harrison, albeit very briefly) and the only one to be preceded and succeeded by the same man, Grover Cleveland. Also one of the few presidents who lost the popular vote but won a majority of the electoral vote, the last to do so until George W. Bush 112 years later. This was at least partly the result of blatant fraud; though Harrison himself was completely uninvolved, some of his supporters openly bought electoral votes to get him elected. He was America's centennial president, being inaugurated exactly 100 years after George Washington.

As president, he signed the McKinley Tariff (one of the highest in US history, named after its foremost champion, then-Representative William McKinley) and the Sherman Anti-Trust Act.

He was a supporter of civil rights for African Americans, his Attorney General William H. H. Miller ordered prosecutions for violation of voting rights in the South; when the white juries often failed to convict or indict violators, he urged Congress to pass legislation to "secure all our people a free exercise of the right of suffrage and every other civil right under the Constitution and laws". Notably, on December 3, 1889, he addressed it in his first State of the Union address. However, sadly the Congress failed to take action on civil rights.

Probably one of the most famous aspects of Harrison aside from his controversial election was his technophilia, with his presidency overseeing some of the biggest and most important technological expansion in the United States in the pre-digital age. Electricity was first installed in The White House during Harrison's term, supplementing the gas lights already in use since nobody at the time expected electricity to replace gas. Harrison and his wife, Caroline, refused to touch the electrical switches for fear of electrocution and left their operation to the White House staff. Harrison also installed the first lighted Christmas tree in the White House, and even more significantly was the first president to have his voice recorded, via a wax cylinder phonograph by Gianni Bettini. The 30-second recording of Harrison's voice can be heard here

Two weeks before he lost his re-election bid, Caroline died after a long illness. Shortly after, Benjamin married a much younger woman, who happened to be his first wife's widowed niece. His two grown children, horrified at the thought of their dad remarrying so quickly (and to someone younger than them), refused to attend the wedding.

Politically, his Congress managed to squander a massive surplus on Civil War pensions and pork-barrel spending, and the national debt surpassed the $1-billion mark for the first time in American history. How much of this is his fault is one for the judges. Critics were outraged by the "Billion-Dollar Congress" and Harrison, and he lost re-election to Cleveland by a large margin in 1892. Harrison himself knew he didn't have much hope of re-election, and only ran because the Republican nomination — so he thought — would probably have otherwise gone to the party's unsuccessful 1884 candidate, James G. Blaine, a scandal-prone man whom Cleveland would likely have beaten even harder.note The nomination would actually have more likely gone to McKinley, who put in a strong performance in the primaries despite trying to decline the nomination, leading to him being nominated, and elected, for real four years later.

He has a nice house that you can visit downtown.

He was very charismatic in public but ice cold in private. He was the last president with a full beard; three mustachioed presidents (Cleveland in his second term, Theodore Roosevelt, and William Howard Taft) would follow. His great-grandfather, also named Benjamin, was one of the signers of the Declaration of Independence.