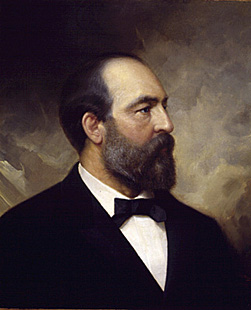 "Assassination can be no more guarded against than death by lightning; it is best not to worry about either."
—James A. Garfield
Advertisement:

James Abram Garfield (November 19, 1831 – September 19, 1881) is most famous for having the same name as a cartoon cat.note In case you're wondering, cartoonist Jim Davis named the character after his grandfather, James A. Garfield Davis, rather than the former president. Still, given his grandfather's name, the cat was named after the president indirectly.

James Garfield was president in 1881, right after Rutherford B. Hayes and before Chester A. Arthur. His father died before Garfield's second birthday, and Garfield grew up in poverty. In his early career, he served as college president and a preacher before joining the army. He distinguished himself enough to rise to the rank of Brigadier General before serving as Chief of Staff to the commander of Ohio's Army of the Cumberland. Garfield was only the overall commander of the Union forces in one battle, the Battle of Middle Creek, which helped secure Kentucky for the Union, paving the way to push forward into Tennessee. Less than thirty of Garfield's men died in the battle. After the war, he had an 18-year career as a Member of Congress for Ohio. In 1880, he was elected to the presidency straight from his seat as a Representative, becoming the only American ever to do so. Garfield did not campaign for the 1880 Republican nomination and was unhappy to receive it, but he represented his party against Democratic candidate Winfield Scott Hancock, winning the presidency by 59 electoral votes and approximately 7,000 popular votes.

As President, Garfield had the second shortest term, 199 days, beaten only by William Henry Harrison. On July 2, 1881, he was shot in a train station by Charles Guiteau, a mentally-ill man who believed in his insanity that he was owed a government job, and that Garfield was refusing to appoint him.

The wound would not have killed him if it were left alone, but then the doctors got involved. Their terribly botched treatment (as Pasteur had not yet discovered germ theory, they tried to remove the bullet with their bare hands, and as they refused to believe Lister's theories on contamination, they used unsterilized tools several times) turned a minor bullet wound into a massive, fatal infection, which left the president in intense pain for eighty days before killing him. Garfield died on Monday, September 19, 1881.

Despite Guiteau claiming the doctors had killed the president, not him, ("I only shot him," more than a little correct)note Not that this would have legally absolved Guiteau of responsibility; see also Felony Murder for why. he was duly found guilty and executed.

This incident is credited by some for convincing future Presidents that perhaps using government jobs as rewards may not be such a good idea. Garfield himself had complained before his shooting about how many would-be officeholders were requesting a handout, and the fact he was gunned down by a would-be appointee spurred a reform. He also notably complained that being in politics cut down on his free time - in a commencement address. While not often portrayed in popular culture, he was, of course one of the subjects of the Stephen Sondheim musical Assassins. He was also discussed in Sarah Vowell's book Assassination Vacation, and was voiced in the audiobook by none other than Jon Stewart.

While Garfield's presidency was too short, in and of itself, to make a serious impact on American history, Garfield himself was both popular and well-respected in his day as an extremely honest and well-meaning politician. He had a consistently progressive record on economic and racial issues, and was a leading proponent of civil service reform. Some recent historians have suggested Garfield would have made a great president had he lived - arguments which can only be conjectural.

He could write Greek with one hand and Latin with the other at the same time. Garfield was also the first President to ever talk on the phone - the man on the other end was Alexander Graham Bell, no less! Bell would later invent one of the first known metal detectors in an effort to locate the bullet lodged in Garfield's body, only for the detector to be rendered useless when Garfield's doctors refused to allow him to be moved from the metal-framed bed where he was resting.