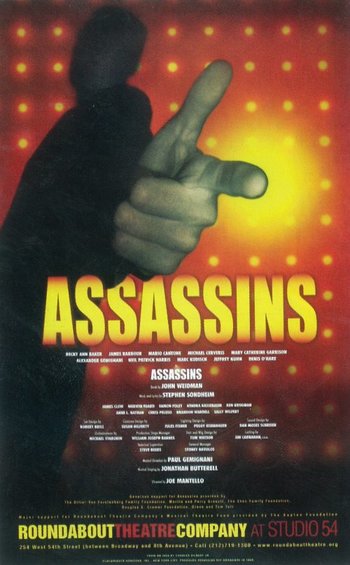 Everybody's got the right to their dreams...
Hey, pal, feeling blue?
Don't know what to do?
Hey, pal, I mean you!
Yeah!
C'mere and kill a president!
— The Proprietor, "Everybody's Got the Right"
Advertisement:

Assassins, with a book by John Weidman and score by Stephen Sondheim, is, to put it simply, a revue featuring nine men and women who have killed (or attempted to kill) the President of the United States.

The show is narrated by the Balladeer, who comments on the assassins' actions and motivations. The various killers (John Wilkes Booth, Charles Guiteau, Giuseppe Zangara, John Hinckley, Lynette "Squeaky" Fromme, Sara Jane Moore, Leon Czolgosz, Samuel Byck, and Lee Harvey Oswald) interact throughout the play, regardless of time period. Their assassination attempts are represented like a carnival game — a bell rings when they succeed, and a buzzer sounds when they fail.

The show is often seen as a dark reflection on the nebulous idea of "the American dream". The assassins are dispossessed, disenfranchised and disillusioned, but they still hold a disproportionate sense of entitlement because they are in America: the land where any kid can grow up to be president, the land where — as the opening song puts it — "everybody's got the right to their dreams". It also takes a sideways look at capitalism and gun culture in America. Basically, imagine a musical where every song is the Villain Song.

Notable in that the music largely mirrors popular music from the assassins' lifetimes. And also for the HUGE amounts of Lyrical Dissonance.