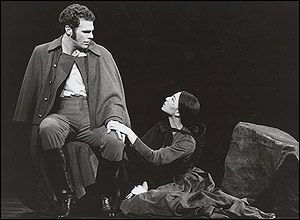 "No one has ever loved me
As deeply as you.
No one has truly shown me
What love could be like until now:
Not pretty or safe or easy
But more than I ever knew.
Love within reason -
That isn't love
And I've learned that from you."
— Captain Giorgio Bachetti, "No One Has Ever Loved Me"
Advertisement:

Passion is a 1994 musical with music and lyrics by Stephen Sondheim and book by James Lapine. Set in 19th century Italy, it concerns a young soldier named Giorgio and the changes in him brought about by the obsessive love of Fosca, his colonel's homely, ailing cousin. It's noticeably even more serious than other Sondheim musicals — the only humor comes in the Soldier's Gossip songs, and even those are fairly dark.