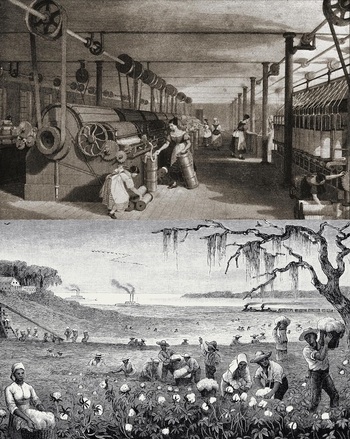 In the industrial North, mill girls spun cotton that was picked by slaves in the agrarian South.
"Shall we expect some transatlantic military giant to step the Ocean and crush us at a blow? Never! All the armies of Europe, Asia, and Africa combined, with all the treasure of the earth (our own excepted) in their military chest with a Buonaparte for a commander could not by force take a drink from the Ohio or make a track on the Blue Ridge in a trial of a thousand years. At what point then is the approach of danger to be expected? I answer, if it ever reach us, it must spring up amongst us."
— Abraham Lincoln, “The Lyceum Address,” January 27, 1838
Advertisement:

This is the period of American history between the ratification of the United States Constitution and the beginning of The American Civil War. ("Antebellum" is Latin for "before the war".)

In this era, the United States experienced plenty of growing pains operating as a new country. And it was growing fast, most dramatically with the Louisiana Purchase brokered between U.S. President Thomas Jefferson and French Emperor Napoléon Bonaparte, which literally doubled the land width of the U.S. overnight. Of course, this land had to be explored, and that's where the famous expedition led by Lewis and Clark came in.

Furthermore, the United States had two major wars. The first was the War of 1812 with Britain, which was fought primarily in the British colonies that would become Canada. This was a much tougher fight than the Americans imagined, with the British troops, colonists and their Native American allies throwing back multiple invasions. After the British pushed the Americans back, they launched their own invasions, the most famous of which were in Washington DC and New Orleans, but these were thrown back as well in a series of decisive American victories (even though one technically took place after the war was over). Although the war eventually ended in a standoff, the United States felt they garnered some respect, the British colonists (the ancestors of today's Canadians) got some pride in helping the redcoats to successfully defend their lands, in which the seeds of Canada were planted, and the Native Americans lost their last chance to defend their sovereignty and stop America's westward expansion.

In the 1840s, there was the Mexican-American War, which enabled the United States to seize most of Mexico's northern territories, including what would become the states of California, Nevada, Utah and Arizona as well as parts of Colorado and New Mexico. California proved a hard sell to settle, but discovering gold there in 1849 seemed a pretty good incentive to make the trek...

However, simmering over all of this was the question of slavery. For the early part of the 19th century, the institution seemed on the way out, until Eli Whitney's invention of the cotton gin which made cotton cultivation much more efficient and profitable, spurring on a renaissance for the controversial institution in the Deep South. The more metropolitan North, on the other hand, eventually abandoned slavery altogether, mostly thanks to industrialization making it no longer cost-effective. Abolitionists started to ask a troubling question: why did America allow so many millions to be held in chattel slavery when it was founded on the ideal that "all men are created equal"? (The writer of that phrase, slaveholder Thomas Jefferson, was deeply conflicted about it himself.) This question fueled a growing rift between North and South that was exacerbated by the growing population of the Northern states which largely rejected slavery and the slave holding South that was realizing how much it was becoming marginalized politically, such as in the US House of Representatives that allotted representatives by population. This resulted in increasingly fractious dealings in the US Congress, especially in the Senate that allotted two senators per state. Thus the decision of which states were Free or Slave ones could mean control of that House of Congress and perhaps control of the whole political agenda of the Federal Government.

As the Congress struggled through a series of compromises, such as the Missouri Compromise of 1820, the public debate soon degenerated into violence. In the South, people were killed for even questioning the institution of slavery, and people like Nat Turner led slave rebellions that served to both scare and anger the Southern populace. A few of such rebels, including, most notably, Turner, were even hanged, drawn and quartered for their rebellions. Desperate to settle the issue, the federal government passed the Fugitive Slave Act in 1850 as part of the Compromise of 1850, declaring that runaway slaves found anywhere in the country (even in states where slavery was illegal) must be captured and returned to their masters. Even worse, free Blacks could be accused of being escaped slaves with no way to dispute it in court. Officers doing the "capturing" could get a cash bonus and/or promotion for each capture, practically guaranteeing wholesale abuse. Even white populations were affected; the law exacted fines and/or jail time for anyone helping an escapee, and innocent bystanders could be forced by a marshal to help hunt down fugitive slaves. The law was meant to be part of a compromise to settle the slavery issue. Instead, it backfired completely into escalating the issue. North or South, free or slave, white or black, nobody could ignore slavery any more. Everyone had to take a stand.

The Northern states did everything they could to block the law's enforcement (Wisconsin's Supreme Court even declared it unconstitutional), but it went into effect anyway. There were murderous mob attacks on abolitionists, even in the North. In Kansas, the question over whether or not to allow slavery in the new state led to a period known as "Bleeding Kansas", in which open combat was fought between pro- and anti-slavery militias. As the true bloody costs of slavery began to become apparent to previously unaffected white communities, one Ohio minister noted, "The question before us is no longer 'Can slaves be made free?', but are we free, or are we slaves under mob law?" Debate over slavery even provoked bloody physical assaults in the US Congress itself, until it became common for Congressmen to attend the chambers armed. Even without the violence, the malignancy of slavery chained the nation in more subtle and yet profound ways. For instance, any opportunity to discuss slavery in Congress was arbitrarily and preemptively disallowed for any seating member for years and for the general public, it was made illegal to simply mail anti-slavery literature, making a mockery of the concept of freedom of speech.

The abolitionists did not take this lying down. Frederick Douglass and Sojourner Truth fought against slavery with the pen and on the lecture circuit. Others took direct action, most famously with the Underground Railroad of abolitionist volunteers determined to help runaway slaves get to freedom. To them, the passage of the Fugitive Slave Act simply meant that the journey had to be extended to the British colony of Upper Canada (now the Canadian province of Ontario). Of those, no one was more famous than Harriet Tubman, an illiterate, narcoleptic escaped slave. She eventually would guide over 300 slaves to freedom in 18 friendly extraction missions in the South, all the while having a combined bounty of $30,000 on her head — and was never caught or lost a slave! Meanwhile, the African slaves on the slave ship Amistad broke their chains, seized control of the ship, were captured by American forces, and won their freedom in the US Supreme Court with the help of former U.S. President John Quincy Adams. However, this same court would later rule in the Dredd Scott case that slavery could be forced upon any region regardless of any political considerations like the Missouri Compromise, capped off with perhaps the most despicable official legal statement ever given in the US Supreme Court when the Chief Justice Taney remarked about African Americans that "they had no rights which the white man was bound to respect." Suddenly, all political compromises on slavery were rendered legally useless and Free states were up in arms at Slave states threatening to force the institution on them.

The simmering conflict took to new heights when the radical abolitionist John Brown tried to capture the Harpers Ferry arsenal and start a slave insurrection. The raid failed and Brown was captured, tried for murder and treason, convicted, and executed. These events sharply polarized the country. The South saw Brown as a traitor, the North as a martyr. Furthermore, each side had had their worst fears confirmed: The South now had proof that the North was willing to take slavery away from them by force, and the North saw that the South would kill to protect it.

A year later, the outspoken anti-slavery politician Abraham Lincoln managed to win the Republican nomination and then the 1860 election to become President — without winning a single Southern electoral vote. This was the final straw for the Southern states harping "state's rights," while ignoring the fact that they had demanded the Northern states conform to slavery against their wishes for years with things like the Fugitive Slave Law and the Dredd Scott case. Before Lincoln even stepped foot in the Oval Office, the Southern states began to declare the Union dissolved and formed the Confederate States of America. Despite Lincoln's desperate attempts to defuse the situation while maintaining the authority of the federal government, Southern cannons fired on Fort Sumter and The American Civil War began.

If there's a Time Travel story here, you can expect the heroes to give Harriet Tubman a hand. Also, if you want an American character who has a family heritage of heroism, having ancestors who were participants in the Underground Railroad is just the thing to live up to. In The DCU, for instance, both the Wayne and Kent families were members.