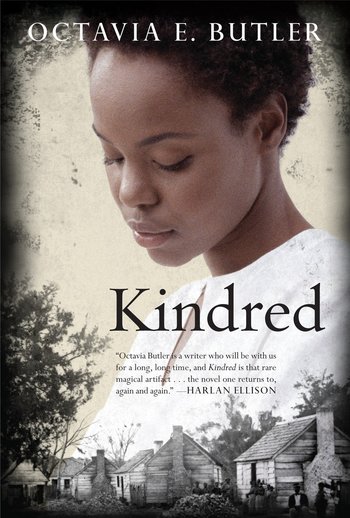 "There are so many interesting times we could have visited."
Advertisement:

It follows a young African-American writer, Dana, who inexplicably finds herself being shunted in time between her Los Angeles, California home in 1976 and a pre-Civil War Maryland plantation. There she meets her ancestors: a proud black freewoman and a white planter who has forced her into slavery and concubinage. As Dana's stay in the past becomes longer, the young woman becomes intimately entangled with the plantation community. She is forced to make hard choices to survive slavery and to try and return to her own time.

First published in 1979, it is still widely popular, as well as being a common choice for high school and college courses.

A graphic novel adaptation by Damian Duffy and John Jennings was released in 2017. A live action series adaptation was announced in March 2021 and premiered on Hulu on December 13, 2022.