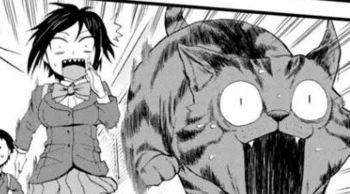 It may be that the character is big, or mean, or evil, or scary-looking, or simply badass. It may be any combination of those qualities. It doesn't even have to be a person, although it usually is. It cannot be a case of a supernatural evil leaking through a failed shield or glamour, though; that's Glamour Failure. This trope isn't limited to dogs, either. The critter that backs down may be any critter, as long as it's established it's a badass in its own right.

Not related to the Tropey The Wonderdog family of tropes.

Contrast with Evil-Detecting Dog, which covers the normal ability of dogs to tell whether someone is nice or not. Also compare with Animal Reaction Shot and Shut Up, Scary Thing. Often used together with Animals Hate Him. See Nice Kitty... for instances in which a character gets softer and friendlier rather than more aggressive when dealing with a scary thing.