Art / The Apotheosis of Washington 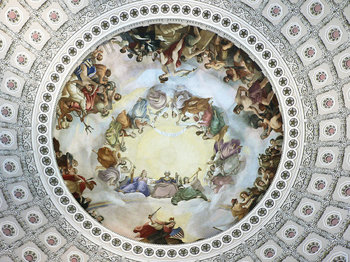 An 1865 fresco depicting President George Washington ascending to godhood. The fresco is painted on the interior of a hollow hemisphere suspended inside the outer dome of the United States Capitol in Washington, D.C., and only mostly visible from the Capitol Rotunda through the oculus of the inner dome.

The focus of the painting is on two circles. In the first inner circle, George Washington sits at the bottom robed in purple with Lady Liberty and Lady Victory at his sides. The rest of the circle is taken up by thirteen girls each representing one of the thirteen original states. The second, outer circle is below the clouds and is made up of six scenes each detailing an American lifestyle: War, Commerce, Science, Mechanics, Marine, and Agriculture.

If this seems like it fits better in the Sistine Chapel than the Capitol, that may be because it was made by The Pope's painter. Constantino Brumidi was an Italian immigrant who spent three years working in the Vatican before coming to America to escape political turmoil and turning the Capitol into a church for America's civic religion. With his expertise in religious art, Brumidi communicated the ideals of The United States through the Tropes of the Divine.

The Apotheosis of Washington provides examples of: