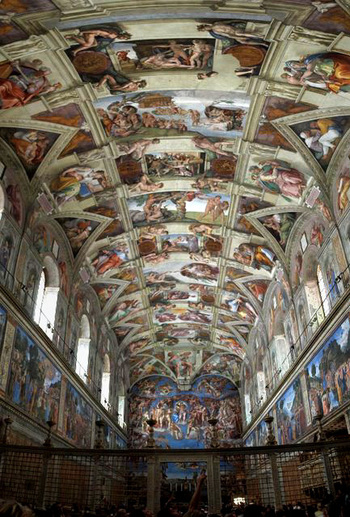 Yes, that's God's creation of Adam casually thrown into this hurricane of art.
"From [the truths of our faith] the human genius has drawn its inspiration, committing itself to portraying them in forms of unparalleled beauty."
— Saint John Paul II
Advertisement:

The Sistine Chapel is the personal chapel of The Pope in Vatican City, Rome. As such, almost every inch of it is decorated, painted, and sculpted to tell some kind of narrative from The Bible. With work by dozens of artists including Raphael Sanzio and Michelangelo Buonarroti, the Chapel holds some of the most important works of art in the Western world, including:

For those unable to make a trip to Rome, a virtual tour of the Sistine Chapel is available on Vatican City's website

The Creation of Adam provided a famous template for artists to parody for centuries to come; see Sistine Steal for examples.

Various parts of the Sistine Chapel contains examples of:

Works featuring the Sistine Chapel and/or its frescoes: