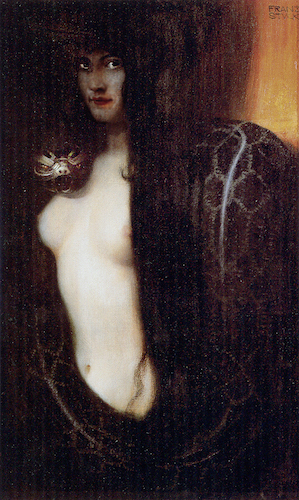 The Sin (German: Die Sünde) is an 1893 painting by the German artist Franz Stuck. It depicts the nude Eve with a large serpent wrapped around her body. In the upper right corner is a bright field, while the rest of the surroundings are dark.

The motif was conceived as a development of Stuck's 1889 painting Sensuality (Die Sinnlichkeit). The Sin was first exhibited in 1893, at the inaugural exhibition of the Munich Secession, where it caused a sensation. It was bought by the Neue Pinakothek in Munich and became a critical and commercial breakthrough for Stuck. It has since become an emblematic painting for the symbolist movement.

Stuck created twelve known versions of the painting. Some of these can be viewed at the Neue Pinakothek in Munich, the National Gallery in Berlin, the Galleria di arte Moderna in Palermo, the Frye Art Museum in Seattle, and at the Villa Stuck in Munich, where it is enshrined in the artist's Künstleraltar.

The Sin provides examples of: