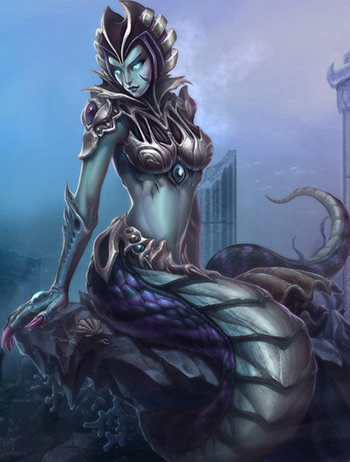 Puts a whole new meaning to the phrase 'Snake Charmer'.
"I love the sexy slither of a lady snake."
— Barry White, The Simpsons ("Whacking Day")
Advertisement:

Simply put, there is something about snakes that inspires our worst fears and greatest dreams. Maybe it's their graceful way of moving, their cool, dispassionate gaze, the smoothness of their scales. Maybe it's the fangs, the way they flick their tongues, or the way they wrap tightly around you in a kind of slinky hug. Maybe it's their suggestive shape, or the fact that they're inherently dangerous, even if they can't actually hurt you.

Whatever the reason, in any situation not emphasizing Snakes Are Sinister or Smug Snake, snakes are used as a symbol of Evil Is Sexy.

Depending on the Mythology you reference, the Lamia or Naga are pretty much the epitome of this. The Lamia is often described as a creature with the body of a snake, and the head, arms, and torso of a human, and are rarely depicted as anything other than incredibly attractive, if not naturally malevolent. The Naga also fits the former's description, but is otherwise depicted as having the entire body of a snake, with the head taking on a human-like face.note Modern culture tends to generalize both creatures as being the same thing. The Lamia originated from Greek mythology, and the Naga mainly from Hindu. Depending on which mythology you follow specifically, the naga can be depicted as either type... It's complicated. Often they are shape-shifters, capable of taking a human or serpentine form.

Western reinterpretations of these monsters are likely to make them a Gorgeous Gorgon with serpentine qualities rendered more alluring than monstrous. They might also be decorated with fetishized "exotic" elements of the Middle-Eastern and Indian cultures from which they are appropriated: don't be surprised to see a serpentine seductress wearing a veil and doing a belly dance holding a scimitar.

See also Feather Boa Constrictor, for snakes worn draped over the shoulders, which often overlaps with this trope. Its Sister Tropes are Sexy Cat Person, Foxy Vixen, and Seductive Spider.