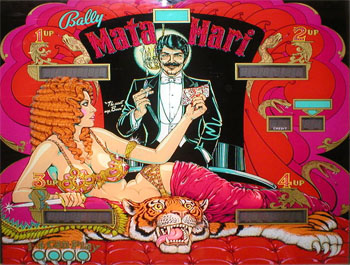 Mata Hari is a Physical Pinball Table designed by Jim Patla with artwork by Dave Christensen. it was released by Bally in 1978, just as the company was switching over from electro-mechanical pinballs to solid state.

Inspired by… the Real Life Mata Hari, the game depicts the exotic dancer and spy performing her duties. The pinball backglass shows her lounging in her chambers, handing a small folded map to a gentleman identified only as The Baron. On the playfield, Mata Hari is passing off documents stamped Top Secret, and is featured stepping out from behind a gigantic knife while framed by oversized feathers and snakes. The sides of the cabinet eschew all subtlety, with Hari pointing at a silhouette of the skull and crossbones while preparing to strike with her dagger.