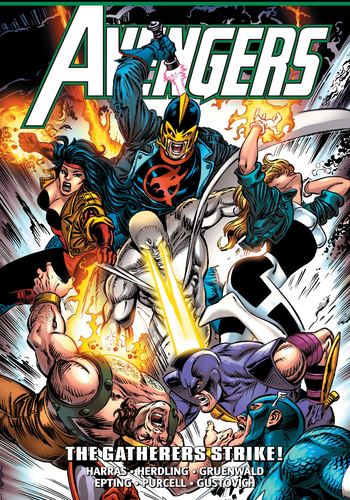 The Gatherers saga is a storyline of The Avengers, from #343 to #375.
Advertisement:

The Gatherers are Avengers from alternate timelines, brought together by the enigmatic Proctor. They are mentally unstable until they are "merged" with their counterparts from the main universe, which in turn erases the main version. The main universe's version of Magdalene was Marissa Darrow, a powerless girl, who is "merged". A new member was Coal Tiger, but the attempt to merge him with Black Panther failed, and the alternate Swordsman was captured by the Avengers. Proctor captured an alternate Vision and made him impersonate the Vision, but he was eventually discovered and used to take the fight to Proctor's lair, who left.

The Black Knight had a love triangle with Sersi and Crystal at the time. He preferred Crystal, but Sersi advanced over him anyway, and eventually the Eternals turned him into her "Gann Josin" (husband under Eternal laws, and with a common mind link). Sersi was suspected of going crazy, but it was eventually revealed that Proctor was influencing her. When the Avengers finally killed Proctor, she left to an alternate universe where she would be free of her madness... and the Black Knight left with her.