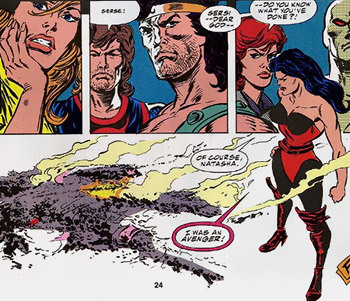 What the hell, Sersi? Thou Shalt Not Kill! But perhaps dealing with murderers with a group called "The Avengers" was just begging for it to happen...
Prelate Souf: Captain Tagon, this is our Defense Chair, Assassin Martre Flamb. He will help you integrate with our own security details.
Captain Tagon: Assassin...
Martre Flamb: ..Martre Flamb, at your service, Captain.
Captain Tagon: That's an interesting honorific.
Martre Flamb: Oh, it's not honorific. I earned it.
— Schlock Mercenary
Advertisement:

This is where a character has a nickname that arose from something they did in the past, usually infamous. This is usually a title gained as a direct result of something they did and is nearly guaranteed to be descriptive of the person it's referring to. This is what usually leads to someone being called The Butcher.

Similar to Appropriated Appellation except the person rarely if ever uses the title. If the title is used in a comedy, expect a Noodle Incident to explain how the character earned it.

Related to The Magnificent but the title tends to describe the person and more often than not gives at least a little backstory. Sufficiently awesome ones are the Red Baron. Awesome Moment of Crowning is often earned, but earning a formal title of nobility is a significantly different concept.