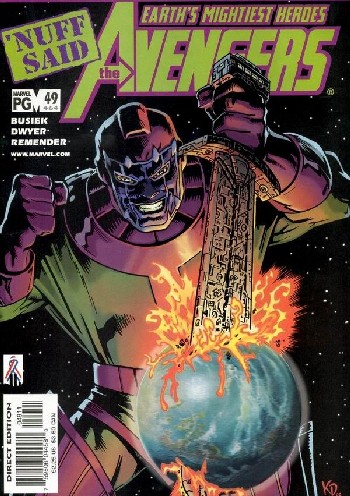 Actually, in this case the cover does not lie. It simply exaggerates.note One of Kang's technologies allow him to manifest a giant-sized hologram of himself in the space... but hardly of planetary size
Advertisement:

The Kang Dynasty, also known as The Kang War, is a storyline of The Avengers, written by Kurt Busiek with art by, among others, Alan Davis, Mark Farmer, Kieron Dwyer and Rick Remender.

After defeating Immortus during the Destiny War, the Conqueror from the Future Kang feels it's the moment to finally conquer 20th century Earth once and for all. Along with his son and heir Marcus, he appears in the 20th Century with the "Damocles" base, a giant space station in the shape of a sword. To display their power, a death ray from the sky obliterates the United Nations, but also generates forcefields that saves everybody inside. Then, he declares his intentions: Earth has many potential bad futures, and he intends to prevent them by conquering Earth now. With his 30th century technology, he will crush all resistance in a few weeks; even allowing himself the luxury of announcing the time and place of his first strike. He promises that, in the meantime, anyone who conquers some land in his name will be favored in his future regime... and several fifth-columnists (Attuma, the Deviants, mutinious military forces) begin to attack.

Despite all the military preparations, the invasion of Europe proceeds without problems for Kang. There's a little hope spot for North America: the Master of the World, a villain who controls alien fortifications that protected the cities and could counter Kang's technology. But the Avengers don't want a civil war between villains, so they send two teams: one to defeat the master and capture his base, and another to attack Damocles base itself. Warbird kills the Master of the World, but the controls of his base are too alien and difficult to understand. Kang destroys the Avenger's ship in space, and attacks Washington DC in retaliation, destroying the city with a futuristic weapon (more or less like an atomic bomb that only kills people, but without radiation). Earth surrenders.

In the meantime, the Triune Understanding (a religious group that has had conflict with the Avengers already) launches a ship to attack the Triple Evil, a threat that would attack Earth someday, and rescues the Avengers floating in space. This Triple Evil is a giant pyramid, which they manage to seize and control. The Avengers at the base of the Master of World finally understand how to operate it, and begin to attack Damocles base once more. Kang announces that, in retaliation for this attack, he will destroy Denver and Atlanta... and then, the pyramid appears, and joined the fight. All the Avengers in the space, the pyramid and a Russian villain fire their many powers at the shield, and the attack of Tremont finally breaks it. Warbird destroys the core, and the base begin to fall to the planet. Kang sends his son back to the XXX century, accepting his own fate.

With his base destroyed and his armour broken, it all comes down to hand-to-hand combat between Kang and Captain America. Kang is defeated and jailed... and rescued by his son Marcus. Still, Kang is very disappointed with him: for robbing him a glorious death, for using time-travel to undo an honourable victory for their enemies, for helping Warbird and not confessing it, etc. But before killing him, a reveal to make him suffer: Actually, he's just one of several clones of the original Marcus, and he will share the fate all the previous Marcus clones that disappointed him.

The upcoming Marvel Cinematic Universe film Avengers: The Kang Dynasty, announced at the San Diego ComicCon 2022 for a release date on May 2, 2025, will share the name with this storyline, but as of this writing, it's still unclear if it will be a Live-Action Adaptation or an original story with the same name.