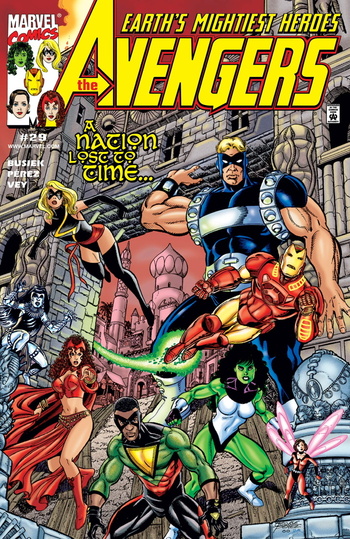 The Death Song of Kulan Gath is a storyline of The Avengers, which took place in Avengers vol. 3 #28-30.

Silverclaw gets word that there are bad things happening back in her hometown, and the team agrees, after doing some public relations demolition work, to accompany her. During the flight to South America, Silverclaw recounts her complete origin, including the possibility that her mother is the goddess Peliali. The team finds her village completely transformed, are attacked by guys on giant birds, and when they try to enter the village, are themselves transformed into medieval/fantasy versions of themselves. After leaving the town limits, the Avengers decide to camp out there, and Triathlon gives attitude about having to get water for his teammates.

The Avengers see that Kulan Gath’s followers are attacking Peliali, and go to help her, but are stopped by some of Gath’s other followers. The god disappears, and the team splits up. Iron Man and Wasp go to stop the local military from intervening, and being trapped in Gath’s spell, while the rest infiltrate the village, using Wanda’s magic to keep from being transformed. They end up in a big bar brawl, while Gath narrates his origin to the captured volcano god. The Avengers are all knocked out with a magic gas, and get trussed up to watch Gath sacrifice Peliali as a ticket to get to some other dimension.

Goliath and Warbird are able to free the Avengers, just as Iron Man and the Wasp show up with the local military. There’s a lot of fighting, but in the end, Gath is able to stab Peliali, although he doesn’t kill her, and is himself taken by the creatures he was trying to summon. Silverclaw watches her goddess mother who she’s never met die, and then becomes a reserve Avenger.