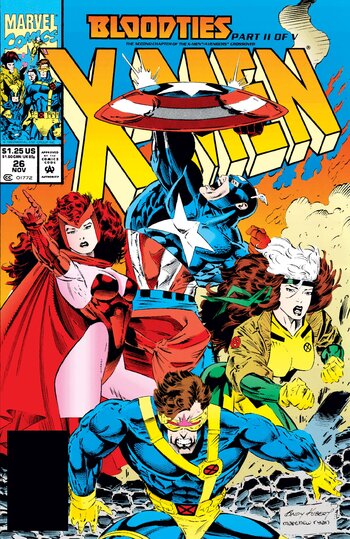 "None of you understand what fate has accomplished this day... a day where all Magneto's heirs have gathered together."
— Exodus
Advertisement:

Blood Ties is the 1993 sequel to the Fatal Attractions (Marvel Comics) storyline and the X-Men/Avengers Crisis Crossover of that year. Like its predecessor story, it was set up as a Milestone Celebration in honor of the 30th Anniversary of both franchises.

Following Magneto's descent to a vegetative state at the end of Fatal Attractions, his renegade ex-Acolyte Fabian Cortez seizes power in the war-torn island nation of Genosha and kidnaps Magneto's granddaughter Luna Maximoff as a way to shield himself from his former lord's wrath. As Luna's father Quicksilver has strong ties to the X-Men and her mother Crystal is a member of the Avengers, this draws both teams of superheroes into the conflict, which is further complicated by the arrival of Exodus, The Dragon to Magneto during Attractions and now the new leader of the Acolytes.

Despite running through four titles (The Avengers, West Coast Avengers, Uncanny X-Men and X-Men (vol 2)), this five-part series was not as influential on the franchise as its predecessor, though the Avengers did lose their U.N. charter and disband their West Coast division as a direct result of the events here. With Cortez dead and Magneto still comatose, Exodus and the Acolytes withdrew into a less active role, holing up on Avalon and not getting up to much villainy until the space station's destruction two years later.

Has nothing to do with the 2007 Canadian TV series about vampires.