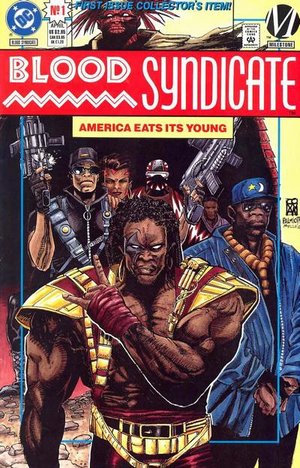 The Blood Syndicate is a Milestone Comics "team" of superhumans created by Dwayne McDuffie, Ivan Velez Jr. and Denys Cowan. It ran for 35 issues from April 1993 to February 1996.

They are an amalgamation of two Dakota City street gangs - the Paris Island Bloods and the Force Syndicate – who survived an event known as the Big Bang from which they developed superhuman powers.

Believing that their survival was meant as proof to pursue a higher purpose, the Syndicate set their sights on eliminating the crime that plagues their city, drawing the ire of both mobsters and the government alike. As they delve deeper into the mystery behind the Big Bang, the Syndicate is forced to overcome not only their enemies, but also their own conflicting ideals and motivations.

In 2022, a reboot of the series, helmed by Geoffrey Thorne and ChrissCross was published as part of DC's Milestone Media initiative. See Blood Syndicate (2022) for tropes pertaining to that series.