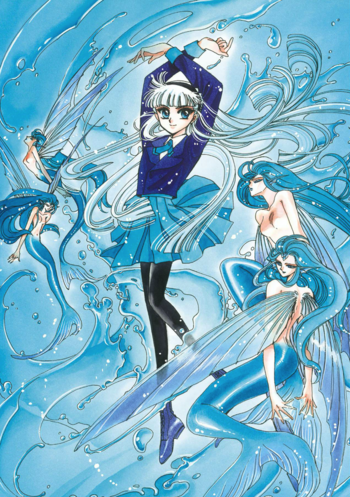 Doesn't get more womanly than mermaids and water.
"A woman should be like water, able to flow over and around anything."
— Ye Wenjie, The Three-Body Problem
Advertisement:

Water is an element associated with healing, purity, calmness, life, creation, and creativity, all of which are traditionally tied to women. It is also regarded as the most elegant of the classical elements due to its fluid nature. As a result, water has become associated with femininity.

This started back with water goddesses such as Nephthys, the Egyptian goddess of rivers and childbirth, and Saraswati, the Hindu goddess of wisdom and the Sarasvati river who would become known in Japan as Benzaiten. Aphrodite, the Greek goddess of love and beauty, was worshipped as a sea goddess for being born from sea foam. Eventually, this led to the myths of female beings associated with water such as mermaids, naiads and nereids, selkies, sirens, and undines.

In modern works, characters who wield water or are associated with it will be feminine in some way, such as by being the Team Mom, a Proper Lady, or some other form of Girly Girl. She will usually be the most feminine one in a Four-Element Ensemble — she'll be the only woman and/or girlier than everyone else. May be the female to the male in a Fire/Water Juxtaposition in cases where Fire Is Masculine.

Sub-Trope of Elemental Personalities and often overlaps with Four-Temperament Ensemble (specifically the phlegmatic) if it involves Making a Splash, and True Blue Femininity as Water Is Blue. Compare Winter Royal Lady. May also overlap with Ice Magic Is Water when the woman also casts magic (which is why ice-slinging women are also very common). Compare and contrast Lord of the Ocean, who is often more aggressive and temperamental due to the association with more "active" water (ocean waves) and Father Neptune, which is more associated with the harshness of the sea on sailors. See also Earth Mother, Mother Nature, and Flowers of Femininity.