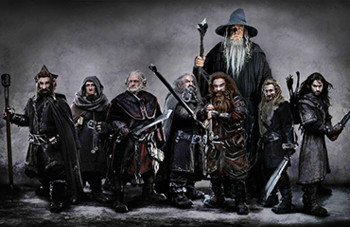 Pity Gandalf isn't in his White version, as the Snow White jokes would write themselves.
"Oh hello, it seems you're forming a fellowship for a noble quest. Well, you can't have one of those without a wizard now, can you?"
—The Shame Wizard, Human Resources
Advertisement:

The Token Wizard (alternatively called the Token Witch, the Token Magician, Token Mage, etc.) stands out among their Super Team as being the only member of the team in-touch with the supernatural in one form or another. It is handy to have someone with deep knowledge on magic, demonic possession and mythical creatures when a team is facing up against such a threat out of the blue.

As magic is an art that requires less actual fighting and more concentration and scholarly wit, these spellcasters usually act as a Support Party Member, casting Status Buffs on their allies and status ailments on their foes. If the Token Wizards all quit and form their own group, then this makes them a Supernatural Team.

Sub-Trope of Fighter, Mage, Thief, Physical, Mystical, Technological and Token Super. Compare to Court Mage and Military Mage. Contrast Badass Normal and The Team Normal. See also Linear Warriors, Quadratic Wizards, Magical Girlfriend and The Smart Guy. Not to be confused with Ethnic Magician, though they do overlap.

When Clan Glomgold is formed, Magica is the only member with any magic or powers.

When Clan Glomgold is formed, Magica is the only member with any magic or powers.