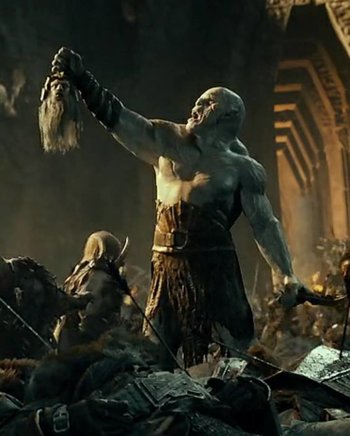 "Moria had been taken by legions of Orcs led by the most vile of their race...Azog the Defiler. The giant Gundabad orc had sworn to wipe out the line of Durin. He began...by beheading the king."
“Yet it is held true by the wise of Eressea, that all those of the Quendi who came into the hands of Melkor, ere Utumno was broken, were put there in prison, and by slow arts of cruelty were corrupted and enslaved; and thus did Melkor breed the hideous race of the Orcs in envy and mockery of the Elves, of whom they were afterwards the bitterest foes. For the Orcs had life and multiplied after the manner of the Children of Iluvatar; and naught that had life of its own, nor the semblance of life, could ever Melkor make since his rebellion in the Ainulindale before the Beginning: so say the wise. And deep in their dark hearts the Orcs loathed the Master whom they served in fear, the maker only of their misery. This it may be was the vilest deed of Melkor, and the most hateful to Iluvatar.”
—A description of how Melkor created the Orcs, The Silmarillion
Advertisement:

The works of J. R. R. Tolkien set in the world of Arda/Middle-earth are the Trope Maker for the High Fantasy genre. It's only fitting then that his battle between good and evil contains some particularly vile foes.

Alternative Title(s): The Lord Of The Rings