A group of nine companions in Peter Jackson's The Lord of the Rings trilogy that set out from Rivendell on the Quest of Mount Doom, to return the One Ring to the fire that created it and destroy the Dark Lord Sauron once and for all.
open/close all folders
In General 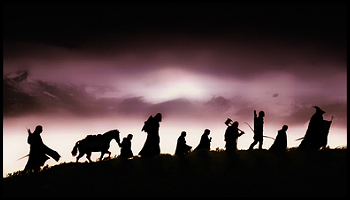 "Nine companions. So be it. You shall be the Fellowship of the Ring."
— Elrond
Advertisement:
Frodo 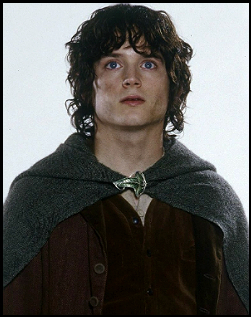 "I wish the Ring had never come to me. I wish none of this had happened."

Appears in: An Unexpected Journey | The Fellowship of the Ring | The Two Towers | The Return of the King

"I spent all my life pretending I was off somewhere else. Off with you, on one of your adventures. But my own adventure turned out to be quite different."
The protagonist of The Lord of the Rings. He was a hobbit of the Shire who inherited Sauron's Ring from his uncle (technically, cousin once removed) and adoptive father Bilbo Baggins and undertook the quest to destroy it in Mount Doom.
Sam 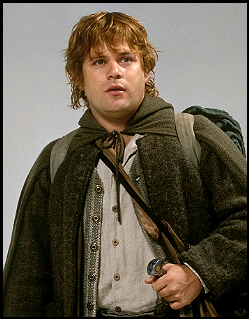 "Hey! Mr. Frodo's not going anywhere without me!"

"I made a promise, Mr Frodo. A promise. 'Don't you leave him Samwise Gamgee.' And I don't mean to. I don't mean to."
Frodo's loyal servant and gardener, who was determined to follow his master wherever he went, even when he was not invited. Sam proved to be a brave and loyal companion and became Frodo's closest friend. His Hobbit-sense and his love for Frodo saw them both through danger and hardship to the end of the quest. Even when things seemed bleakest, Sam refused to give up hope, both because of his natural optimism and desire to ease the burdens Frodo carried, especially as they got closer to Mount Doom.
Merry 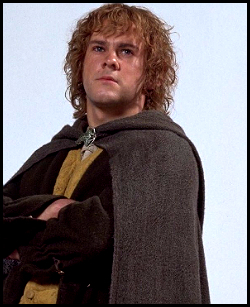 "We're under orders from Treebeard, who has taken over management of Isengard."

"But you're part of this world, aren't you?... You must help... please."
A sensible yet adventurous Hobbit whose concern for his cousin Frodo led him to mastermind the "conspiracy" that ensured that Frodo embarked on his quest with his friends at his side. Despite his feelings of uselessness and self-doubt, Merry becomes a Knight of the Riddermark and plays a significant role in the War of the Ring. Through his loyalty and courage, he helped defeat one of the Dark Lord's most terrible servants, the Witch-King.
Pippin 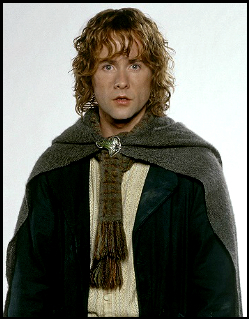 "Anyways, you need people of intelligence on this sort of... mission... quest... thing."

"What about elevenses? Luncheon? Afternoon tea? Dinner? Supper? He knows about them, doesn't he?"
A silly and reckless Hobbit who insisted on accompanying his cousin Frodo on his quest to destroy the One Ring. Pippin's youth and curious nature gets him into trouble on occasion, but his steadfast friendship and unquenchable cheerfulness helps carry him and his companions through the darkest times. During the quest, he is forced to mature rather quickly and becomes an important member of the Fellowship, a member of Gondor's elite Citadel Guard, and later made a Knight of Gondor by Aragorn.
Gandalf 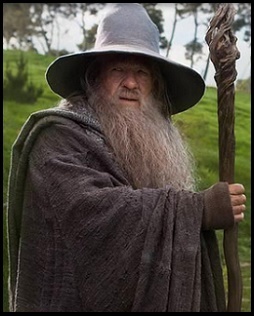 "A wizard is never late, Frodo Baggins. Nor is he early. He arrives precisely when he means to." 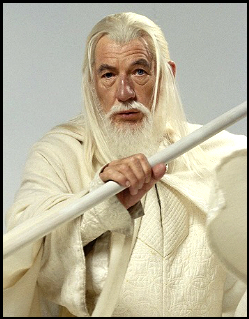 "I am Gandalf the White. And I come back to you now, at the turn of the tide."

"I am a servant of the Secret Fire, wielder of the flame of Anor! Go back to the shadow! The dark fire will not avail you, flame of Udûn! You shall not pass!"
A wizard who assisted both Bilbo and Frodo Baggins in their quests across Middle-Earth. Gandalf is a member of the Istari, a group of Maiar that were specially chosen by the Valar to aid the Free Peoples of Middle-Earth in the fight against evil. The Istari, who are often called wizards by various races, take the form of elderly but hale Men, but possess much greater physical, mental, and magical power (though the Valar prevent them from confronting Sauron with the full force of their power). For over 2,000 years, Gandalf worked faithfully against the rising powers of evil in Middle-Earth.
Advertisement:
Aragorn 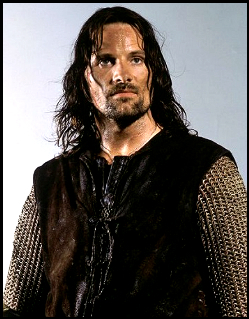 "I do not know what strength is in my blood, but I swear to you I will not let the White City fall, nor our people fail."

Arwen: Why do you fear the past? You are Isildur's heir, not Isildur himself. You are not bound to his fate.
Aragorn: The same blood flows in my veins. The same weakness.
Arwen: Your time will come. You will face the same evil, and you will defeat it.
The 16th Chieftain of the Dúnedain of the North. As the heir of Elendil, and the first High King of Arnor and Gondor, Aragorn is the rightful king of both realms, though Arnor fell long ago, and Gondor has been without a king for nearly 1000 years. Aragorn lived much of his life as a Ranger, but was eventually crowned King Elessar Telcontar in Minas Tirith as the 26th King of Arnor, and the 35th King of Gondor and First High King of the Reunited Kingdom. He was a great warrior, and as the heir of Isildur (Elendil's eldest son) bore the shards of Narsil, re-forged and renamed Andúril ("Flame of the West"), in the War of the Ring.
Legolas 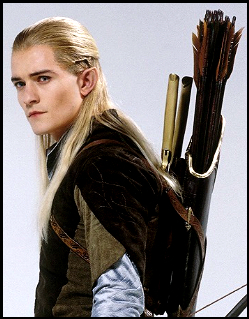 "Something draws near. I can feel it."

Appears in: The Desolation of Smaug | The Battle of the Five Armies | The Fellowship of the Ring | The Two Towers | The Return of the King

"The stars are veiled. Something stirs in the East. A sleepless malice. The eye of the enemy is moving."
An Elf of the Woodland Realm in northern Mirkwood in the east of Middle-earth, Legolas was part of the Fellowship in the Third Age. He is the son of King Thranduil of Mirkwood and a Prince of the Woodland Realm as well as a swift messenger and master bowman. Legolas eventually became great friends with the dwarf Gimli, who was also a member of the Fellowship of the Ring.
Gimli 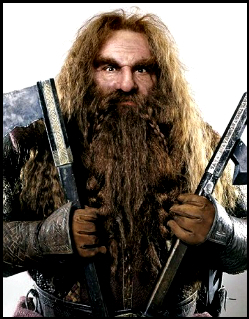 "Certainty of death. Small chance of success. What are we waiting for?"

Appears in: The Desolation of Smaugnote picture only | The Fellowship of the Ring | The Two Towers | The Return of the King

"What madness is this? An elf will venture underground, where a dwarf dare not? Aah, I'd never hear the end of it!"
A Dwarf of Erebor, descended from Durin the Deathless, the eldest of the Seven Fathers of the Dwarves and thus a cousin to the royal family. Gimli is a powerful dwarf lord and a mighty warrior, as well as the son of Glóin, who helped reclaim the Lonely Mountain with Bilbo Baggins sixty years prior to the War of the Ring. Gimli was a member of the Fellowship of the Ring and was the only dwarf to readily fight alongside elves in the war against Sauron at the end of the Third Age. After the defeat of Sauron, he was given lordship of the Glittering Caves at Helm's Deep and founded a flourishing Dwarven colony there.
Boromir 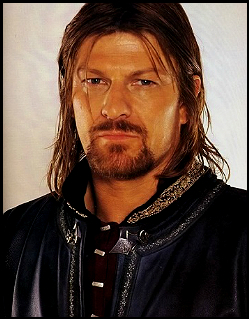 "I ask only for the strength to defend my people!"

"Gondor has no king. Gondor needs no king."
Eldest son and heir of Denethor, the Ruling Steward of Gondor. Boromir is a Captain of the White Tower, Captain-General of Gondor, a masterful soldier, and a natural leader who led his beleaguered people to dozens of great victories over the forces of Mordor. Still, Boromir is more concerned with feats of arms than his wiser and more bookish little brother, Faramir.