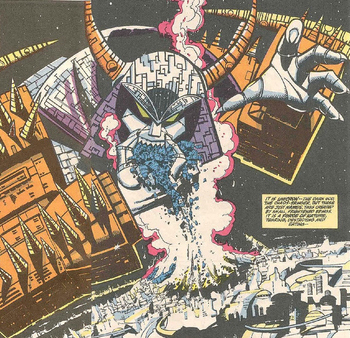 "Something evil's watching over you / Comin' from the sky above / And there's nothing you can do...There'll be no place to run / When you're caught within the grip / of the evil Unicron!"
"Say goodbye to the universe, Maximals! The future has changed. Yes. The Autobots lose! Evil triumphs! And you...you no longer exist!"
— Megatron, after trying to murder Optimus Prime and rewrite history, Beast Wars, "The Agenda, Part 3"
Advertisement:

Ever since the 1980s, the Robots in Disguise have faced various threats, both on Earth and from the farthest reaches of the galaxy. Here are the worst of the worst.

Other Crossovers (by publication date)

Other Continuities (by release date)