The Dark Lord Sauron and his forces of evil in Peter Jackson's The Lord of the Rings and The Hobbit film trilogies.
open/close all folders
Advertisement:

Sauron, The Dark Lord of Mordor (a.k.a. The Necromancer) 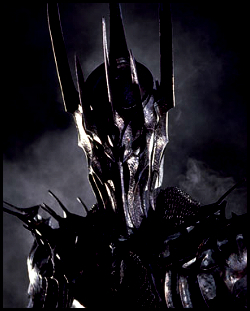 "There is no life in the void. Only death."
Click here to see his Eye Form 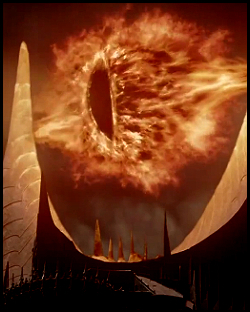 "You cannot fight the shadow. Even now you fade. One light, alone in the darkness."
The eponymous Lord of the Rings and primary villain of the series. During the First Age, he was a servant of the dark lord Morgoth until his master was defeated and cast into the Void. In the Second Age, he took up the mantle of Middle-earth's resident Dark Lord, creating the Rings of Power, with his own ring being superior to all others. His reign came to an end when he lost the One Ring in battle against the united armies of men and elves.By the Third Age, he takes up residence in Dol Guldur, resurrects his fallen servants the Nazgûl, and attempts to regain power under the guise of the “Necromancer.” After he is driven out by the White Council, he returns to Mordor where he begins building a massive army and searching for his lost Ring, with which he will finally be able to hold dominion over Middle-earth.
The One Ring 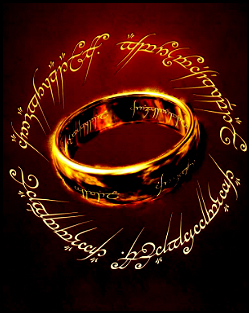 "So much fear and doubt… over so small a thing. Such a little thing…"

"One Ring to rule them all, One Ring to find them, One Ring to bring them all, and in the darkness bind them."
The Ruling Ring forged in the fire of Mount Doom by the Dark Lord Sauron with the power to dominate the Nine (given to Men), the Seven (given to Dwarves), and the Three (given to Elves). Unknown to many, the Ring possesses a mind and will of its own, always seeking to return to its master by any means necessary including the corruption of any who even come too close to it.
Advertisement: 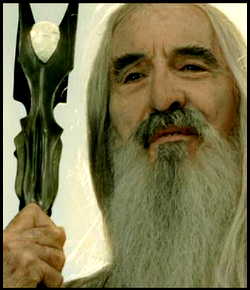 "I gave you the chance of aiding me willingly, but you have elected the way of pain!"

Appears in: An Unexpected Journey | The Battle of the Five Armies | The Fellowship of the Ring | The Two Towers | The Return of the King

"The world is changing. Who now has the strength to stand against the armies of Isengard and Mordor? To stand against the might of Sauron and Saruman and the union of the Two Towers? Together, my Lord Sauron, we shall rule this Middle-earth."
The leader of the Istari, an order of wizards sent by the Valar to Middle-earth to aid Men, Elves, and Dwarves in their struggle against the darkness. Unfortunately, Saruman was tempted by the power of the One Ring and turned to evil. Like Gandalf, he is in fact an angelic Maia spirit with the appearance of an elderly but vigorous man.
Gríma Wormtongue 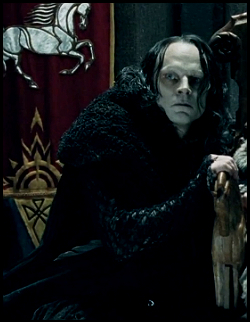 "Late is the hour in which this conjurer chooses to appear. "Lathspell" I name him. Ill news is an ill guest."

"Who knows what you have spoken to the darkness, alone, in the bitter watches of the night, when all your life seems to shrink, the walls of your bower closing in about you, a hutch to trammel some wild thing in?"
Once a Man of Rohan, Gríma entered the service of the evil wizard Saruman and acted as the agent of his dominance over Rohan before the Fellowship's arrival in Edoras. After being freed from Saruman and Gríma's joint mind control, Théoden spared him, and he returned to Isengard and betrayed the Hornburg's sole weakness to Saruman.
The Witch-king of Angmar

The Witch-king of Angmar 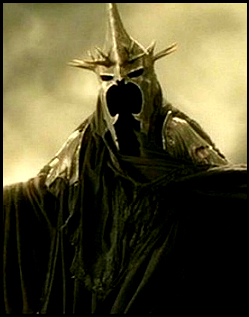 "Do you not know death when you see it, old man? This is my hour!"
Click here to see his true form 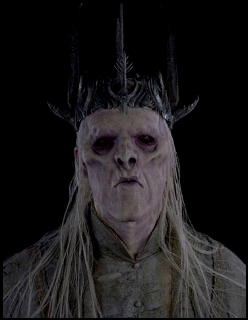 "Sauron has yet to reveal his deadliest servant… the one who will lead Mordor's armies in war. The one they say no living man can kill. The Witch-king of Angmar. You've met him before. He stabbed Frodo on Weathertop. He is the lord of the Nazgûl… the greatest of the Nine. Minas Morgul is his lair."
— Gandalf the White
Indubitably the greatest of Sauron's servants, the Witch-king of Angmar holds the greatest of the Nine Rings of Power given to Men and is the Lord of the Nazgûl. The Witch-king was previously king of the evil realm of Angmar in Northern Eriador, which destroyed the fortress-city of Fornost (and with it, the northern Dúnedain kingdom of Arnor). Soon afterward, Angmar was itself destroyed by a combined force of Elves and Men of Gondor and (the remnants of) Arnor, after which the Witch-king was imprisoned in a tomb until Sauron (as the Necromancer) resurrected him.
Nazgûl 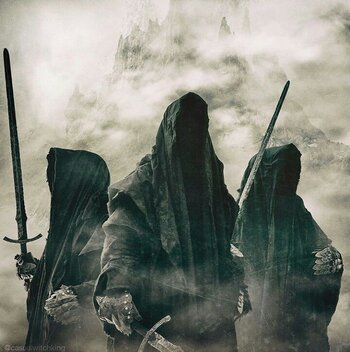 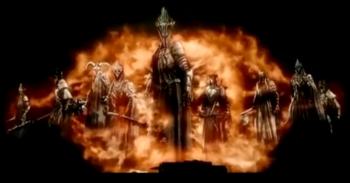 Appear in: An Unexpected Journey | The Desolation of Smaug | The Battle of the Five Armies | The Fellowship of the Ring | The Two Towers | The Return of the King

"They were once Men. Great kings of Men. Then Sauron the Deceiver gave to them nine rings of power. Blinded by their greed, they took them without question, one by one falling into darkness. Now they are slaves to his will. They are the Nazgul, Ringwraiths, neither living nor dead. At all times they feel the presence of the Ring, drawn to the power of the One. They will never stop hunting you."
— Aragorn
The Nazgûl (also known as Ringwraiths, sometimes written Ring-wraiths, or as the Black Riders, the Nine) were the dreaded ring-servants of the Dark Lord Sauron in Middle-earth throughout the Second and Third ages, and in the later years of the Third Age, they dwelt in Minas Morgul and Dol Guldur.
Advertisement:
Trolls

Monsters originally created by Morgoth as mockeries of the Ents. Now they serve Sauron and other evil beings and exist in many variations/subspecies, including the deadly and intelligent Olog-hai, the exceptionally strong but awesomely stupid Cave Trolls, and the large, fast, and darkly cunning Mountain Trolls.
Mouth of Sauron

The Mouth of Sauron 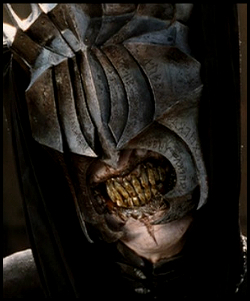 "Is there any in this rout with authority to treat with me?"
A Black Númenórean who serves as Sauron's mouthpiece to the Captains of the West. Unceremoniously decapitated by an enraged Aragorn.

"Do you know how the Orcs first came into being? They were Elves once. Taken by the Dark Powers… tortured and mutilated. A ruined and terrible form of life."
— Saruman

A race of savage humanoid creatures who serve as the foot soldiers of Middle-earth's major villains.

Azog the Defiler (a.k.a. The Pale Orc) 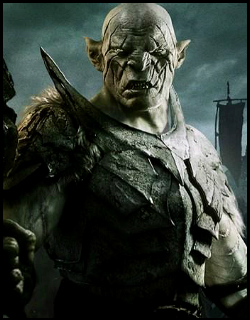 "Do you smell it? The scent of fear?"

"I don't want excuses. I want the head of the Dwarf-king!"

Orc King of Moria and slayer of Thrór (Thorin's grandfather), Azog is a powerful Orc chieftain with a vendetta against Dwarves, Durin's line in particular, which he has sworn to exterminate. He turns out to be a servant of Sauron, and, at his master's behest, leads a large force of Orcs to claim Erebor during the Battle Of the Five Armies.
Bolg 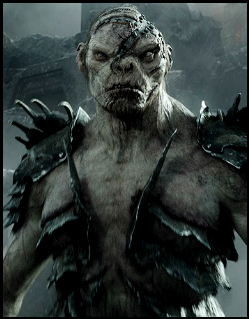 Son of and second to Azog, Bolg is, like his father, a powerful Orc chieftain.
Azog's Hunters

The combined group of Orcs, Goblins, and Wargs that assist Azog in his hunt for Thorin and Company. See also the descriptions of the general species in the character pages of The Hobbit and The Lord of the Rings. Here are tropes that represent notable individuals in the group, and the group in general.
Gothmog 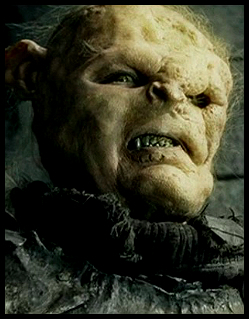 "Move into the city. Kill all in your path."

"Fear. The city is rank with it. Let us ease their pain. Release the prisoners!"
The Lieutenant of Minas Morgul who serves as the Witch King's second in command during the siege of Minas Tirith.
Gorbag 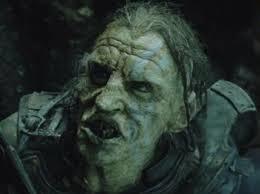 An orc captain from Minas Morgul, who gets into a disagreement with his comrades over Frodo's Mithril vest.
Grishnákh 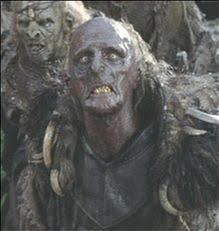 "Go on. Call for help. Squeal! No-one's gonna save you now…"

The leader of the Warg riders sent by Saruman to harass the Rohirrim refugees.
Torturer of Dol Guldur

Appears in: An Unexpected Journeynote Flashback | The Battle of the Five Armies

An orc warden who works for Sauron in Dol Guldur.

"This is no rabble of mindless Orcs. These are Uruk-hai. Their armour is thick and their shields broad."
— Gimli
Lurtz 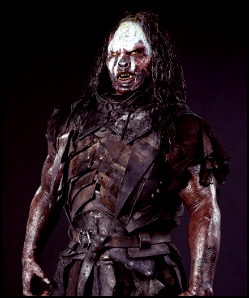 The firstborn of Saruman's Uruk-hai who is given the task of hunting down the fellowship in order to retrieve the One Ring. 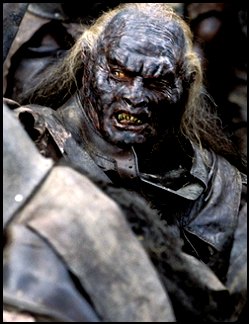 Uglúk was the leader of the Uruk-hai scouts and was highly trusted by Saruman.

Shagrat was the captain of the garrison at Cirith Ungol, who gets into an argument with Gorbag over Frodo's Mithril vest.