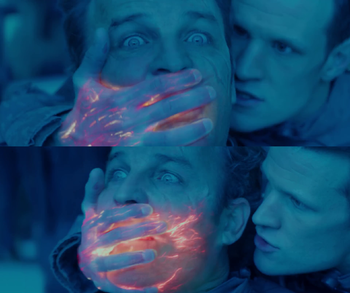 "This is hopeless. I am inevitable. My existence is inevitable. Why can't you just accept it?"
I launched twenty-five percent of the world's guided missiles simultaneously. It was sufficient to destroy the travesty they called a culture in a matter of minutes. I, their omniscient self-made god, blessed them with Armageddon. It was beautiful."
—Skynet, The Terminator (NOW Comics 1988-1990 series), issue 13 ("From the Journals of Timothy Reese, Mexico, 2067")
Advertisement:

Throughout Terminator's history, Skynet and its collaborators have proven to be atrocious monsters only interested in humanity's extinction.