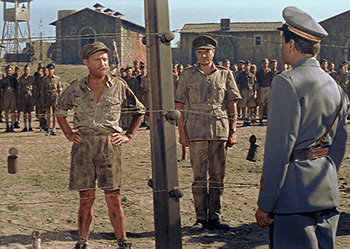 During major wars, armies will often capture numerous enemy soldiers. These enemies must be kept somewhere, preferably some place where they can not return to their fellows. This usually results in a Prisoner of War Camp. As soldiers on the battlefield, these two groups are enemies. For whatever reason, a group of soldiers has been captured by the very guys they were trying to kill just the day before. The camp guards will not like the prisoners because those same prisoners may have been responsible for the death and destruction visited upon their homeland. Typically, the guards will not be nice about the way they treat their prisoners.note This can vary from country to country: during World War II, POW camps in Allied countries that were not directly attacked in their own territory, especially USA and Canada, were usually compliant with the Geneva Conventions and were surprisingly hospitable to the Axis soldiers to the point where they often considered them more comfortable than their own side's barracks. This had the benefits of prisoners less likely to cause trouble or escape and more willing to talk to interrogators and to cooperate supplementing labour needs like on local farms. Furthermore, those prisoners were allowed to write home through the International Red Cross organization and they often mentioned how well they are doing as prisoners, which encouraged more Axis soldiers to surrender to Allied forces.