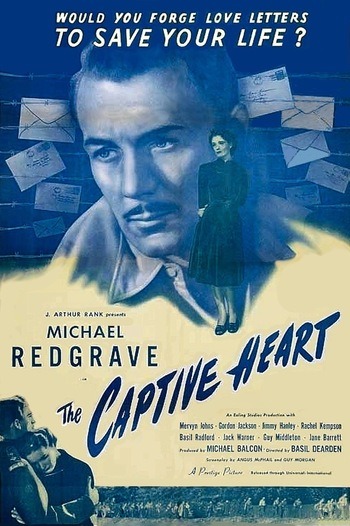 Who wouldn't?
Lt. Stephen Harley: Last Christmas I had my first concert. It was where I met Caroline.
Capt. Karel Hasek, alias Geoff Mitchell: Last Christmas I was in Dachau Concentration Camp. Christmas Eve a new batch of prisoners came in. One of them brought me news of my family. They'd been caught giving food to a Polish Jew. They were taken out and shot. My father, mother, all of them.
Advertisement:

The Captive Heart is a 1946 British war film directed by Basil Dearden, starring Michael Redgrave and his real life wife, Rachel Kempson. The film tells the story of a Czech concentration camp surviver, Capt Karel Hasek (Redgrave), who has to assume the identity of a dead British soldier named Geoff Mitchell and join British prisoners of war to avoid execution. Part of living under his false identity involves writing letters to the Mitchell's wife so that the prison authorities won't suspect. On receiving his letters, Mitchell's estranged wife, Celia (Kempson), begins to hope for a reconciliation, unaware that the man writing to her is not her husband.