Film / The Beast in Heat 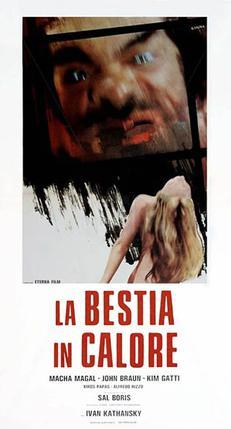 The Beast in Heat (also known as SS Hell Camp, SS Experiment Part 2 and Horrifying Experiments of the S.S. Last Days) is a 1977 Italian Exploitation Film about fictionalized World War II Nazi POW camp atrocities, a common theme amongst the video nasties. It was directed by Luigi Batzella and written by Batzella and Lorenzo Artale. The film gained notoriety when it was placed on the list of Video Nasties and banned in the United Kingdom.
Advertisement:

Dr. Ellen Kratsch, a beautiful and sadistic senior SS officer and doctor, creates a half-human, half-beast, incubus-like mutant. This ugly, squat creature has a limitless sexual appetite, and so Kratsch uses it to molest and torture the female prisoners of war under the clinical eye of the Nazis, keeping it happy by feeding it aphrodisiacs.

Hewing closely to the basic premise of Ilsa, She Wolf of the SS and its sequels, this film follows the trend of Nazisploitation films that Ilsa pioneered, and Kratsch is clearly modeled after Ilsa. It is considered one of the worst (or funniest, if you have a really sick sense of humour) films ever made, using only a single set of a laboratory with a cage in the middle, cheap costumes, poor lighting and inept editing.