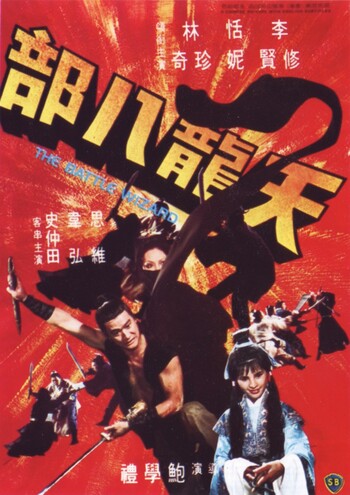 The Battle Wizard is a 1977 fantasy-kung fu-wuxia film directed by Pao Hsueh-li and produced by Shaw Brothers, starring Danny Lee, and very loosely based on the Jin Yong novel Demi-Gods and Semi-Devils.

Twenty years after being betrayed by his lover, and losing his legs in a failed battle for honor, a disgraced martial artist known as the Yellow Robed Master has returned for vengeance on the clan who made him who he is, as well as declaring war on the martial world.

Prince Tuan-Yu (Danny), a young protégé from the Tuan clan, refused to follow his father's footsteps into becoming a warrior, intending to be a scholar instead. But after a run-in with a Snake Sorceress, Zhong Ling-erh, as well as a black-clad mysterious lady assassin Mu Wan-qing, Tuan Yu realize he's destined to defeat the returning great evil.

There's also laser-fingers, giant snakes, underground pits containing a kung-fu fighting gorilla, and chi powers which can be multiplied by ingesting live frogs. It's as weird and awesome as it sounds.

For a similar psychedelic kung-fu experience, check out Buddha's Palm, Holy Flame of the Martial World, Demon of the Lute and Descendant of the Sun for more fantasy-wuxia craziness.

The Battle Wizard contain examples of: