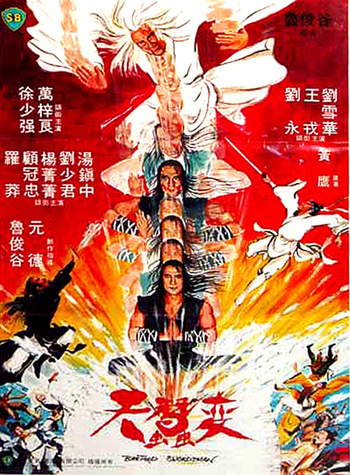 Using an idea that's been the norm since One-Armed Swordsman; Norman Chu stars as Yun Fei Yang, the often-bullied orphan outcast adopted in a kung-fu school, who is frequently the target of abuse and looked down by all his peers, save for Lun Wan-erh, the daughter of the school's founder. Every decade, the school is challenged by the rival Dugu Sect, in a martial arts tournament for supremacy, but when Chief Dugu Wu Di, a long-forgotten rival with a deadly vendetta and intention to have the school massacred, Yun Fei Yang unexpectedly finds himself fated to be The Chosen One to battle the Dugu clan.

A sequel is released just a year later, titled Return of the Bastard Swordsman. Yun Fei Yang, the unlikely hero of the first movie, having mastered the Silkworm Technique of kung fu, now travels the land to pass his teachings. But he'll need to contend with a group of ruthless samurai led by the warlord Mochitsuki Soryu Han (Chen Kuan-tai).

Return of the Bastard Tropesman: