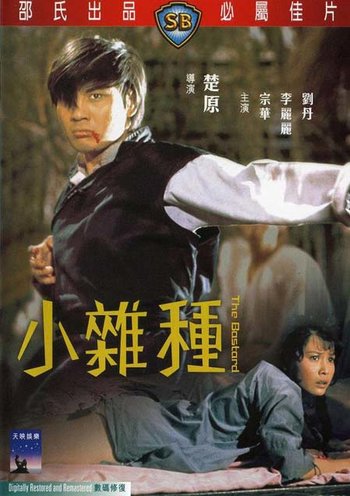 He's the one on top.
Advertisement:

The titular bastard refers to Chung Wa's character, Xia, an orphan raised by a hermit from the mountains; upon completing his training, Xia's mentor tells him to head for the big city and find his true aim in life, which he constantly questions during his apprenticeship. But without friends or relatives, a seemingly random run-in with the spunky beggar-girl Hsiao-yi (Lily Li) results in both of them becoming inseparable as Xia and Hsiao-yi tries making a living in the big city.

But with a twist of fate, Xia eventually finds out his true parentage; he is the long-lost son of Master Gu, a wealthy landlord and local baron, who has been seeking his true child for years, and is immediately appointed as the heir to the Gu family's riches, on the condition that he cuts of all ties with his past; including those with his best friend, Hsiao-yi.

The Bastard Contains Examples of...