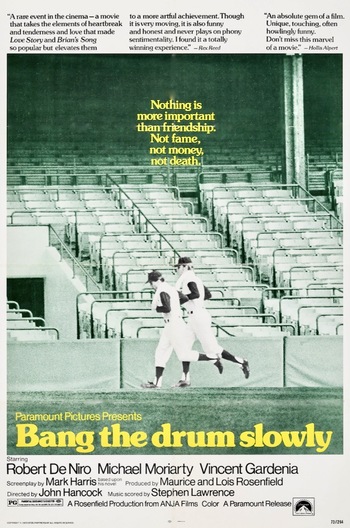 Bang the Drum Slowly is a 1973 American melodrama film directed by John Hancock, adapted by writer Mark Harris from his own 1956 novel of the same name and starring Robert De Niro, Michael Moriarty, and Vincent Gardenia.

The story revolves around a pair of baseball players with the fictional New York Mammoths: dim, folksy catcher Bruce Pearson (De Niro) and snarky pitcher Henry Wiggen (Moriarty). Bruce reveals privately to Henry that he has incurable Hodgkin's Disease and probably won't last the year. Henry promises to help Bruce, since the disease is sapping his ability to play, and to keep it a secret from their teammates and manager Dutch Schnell (Gardenia, who earned an Academy Award nomination for his role).

This wasn't the first screen version of Harris' novel; the same year it was published (1956), it was adapted for television as an episode of The U.S. Steel Hour, starring Paul Newman as Henry, Albert Salmi as Bruce, and a young George Peppard as the ballplayer who sings "Streets of Laredo".

The film is regarded by many as a Spiritual Successor to the similarly-themed Brian's Song, though the Harris novel and teleplay predated the latter by two decades.