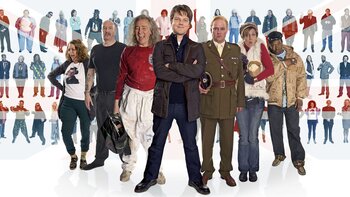 Bellamy’s People is a 2010 BBC comedy series done in the style of a rockumentary. It stars Rhys Thomas as Gary Bellamy, the fictional host of the popular radio show, Down the Line, of which this is a spin off. It follows Bellamy as he travels around the country asking the many people he meets about modern Britain and what it means to be British. Some of the people Bellamy meets are long time callers to his radio show, but many he meets are totally new to this series. And all of them are completely weird.
Advertisement:

It starred several of the cast members of The Fast Show, including Paul Whitehouse, Charlie Higson and Simon Day. Whitehouse and Higson also directed it.