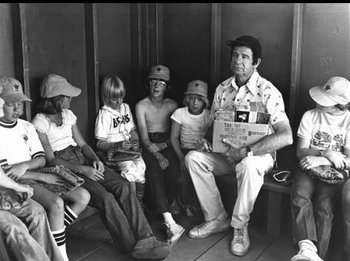 "First base, second base, third base, home!
Around them bases we shall roam!"
Advertisement:

The Bad News Bears is a 1976 comedy film directed by Michael Ritchie.

Walter Matthau stars as Morris Buttermaker, an alcoholic former minor-league baseball player who becomes the coach of the Bears, a cellar-dwelling Little League baseball team with poor playing skills and little hope of ever winning. To bolster the team's abilities, he recruits Amanda Wurlitzer (Tatum O'Neal), a skilled pitcher who happens to be the eleven-year-old daughter of one of Buttermaker's former girlfriends, and Kelly Leak (Jackie Earle Haley), the local cigarette-smoking troublemaker. And, miraculously, the notoriously chronic underdogs start winning under Buttermaker's careful coaching. Now all that lies between them and victory is the championship game...

The film was followed by two sequels, The Bad News Bears in Breaking Training (1977) and The Bad News Bears Go to Japan (1978), and a short-lived 1979-80 CBS television series, none of which were able to duplicate the success of the original. Remade in 2005 as Bad News Bears, directed by Richard Linklater and starring Billy Bob Thornton as Buttermaker.

Not to be confused with Bears Are Bad News.

This movie, and its two sequels, contain examples of:

The 2005 remake contains examples of: