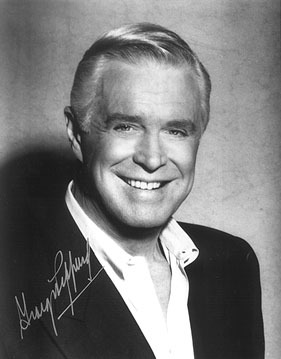 "I love to entertain an audience."
Advertisement:

George Peppard Jr. (October 1, 1928 – May 8, 1994) was an American film and television actor. He was born in Detroit, Michigan, as the son of building contractor George Peppard, Sr. and opera singer and voice teacher Vernelle Rohrer.

His most famous film role was in Breakfast at Tiffany's (1961), alongside Audrey Hepburn. On television, his two main roles were the titular character in the early-1970s mystery series Banacek, and as Col. John "Hannibal" Smith, the cigar-chomping leader of a renegade commando squad, in the hit 1980s action show The A-Team.

Peppard was married five times, one of them to actress Elizabeth Ashley, and was the father of three children. In 1990 he remarked, regarding his many divorces, "Getting married and having a bad divorce is just like breaking your leg. The same leg, in the same place. I'm lucky I don't walk with a cane."

Peppard was also a chain smoker for most of his life, frequently smoking three packs of cigarettes a day. He eventually quit, however, when he was diagnosed with lung cancer in 1992, and had a lung removed as a result. It didn't completely get rid of the cancer, and his health continued to decline. While still battling lung cancer, Peppard eventually passed away in 1994 in Los Angeles, from a bout of pneumonia.