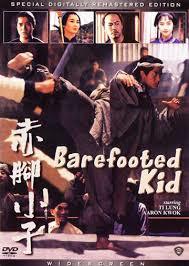 A DVD cover showing the titular hero living up to his name.
Advertisement:

The Bare-footed Kid is a 1993 Martial Arts Movie directed by Johnnie To, starring Ti Lung, Maggie Cheung and a very young Aaron Kwok in arguably the role that kickstarted his career in the early 90s. It's a remake of Disciples of Shaolin.

Kwok stars as Kwan Fung-yiu, the son of a deceased martial artist who left his hometown after his family's downfall. Stripped of all his prized possessions, including his shoes (hence the title), and having knowledge in exactly nothing save for fighting, Kwan travels to the big city to rendezvous with Master Tuan (Ti Lung), an old friend of his father, who is a retired kung-fu fighter himself. Master Tuan owns the "Four Seasons Weaver" silk factory, the largest silk mill in the city, alongside the mill's resident head seamstress Madam Pak (Maggie), but another factory called the "Tin Lung Spinner" owned by the ruthless Master Hak Wo-po, wants to have the Four Seasons Weaver eliminated at all costs.

Being poor, illiterate and a loner, Kwan finds it difficult to fit working in the weaver, had to juggle his feelings for the daughter of a local martial artist Wong-lin (Jacklyn Wu) who befriended Kwan, and his own desires to make a name for himself despite his status.

Although the film was produced by Cosmopolitan Films, much of its resources, from screenplay to inspiration and production, comes from Hong Kong's Shaw Brothers studios. At the time of production, Shaw Brothers was is on its last legs, ready to close down all productions and be converted to a tourist attraction instead of a film studio. As such, it is not uncommon for international re-releases to consider this movie to be an honorary member of the Shaw Brothers film catalogue.