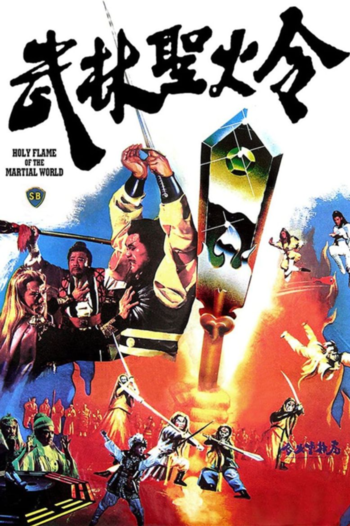 Holy Flame of the Martial World is a 1983 Martial Arts Movie produced by the Shaw Brothers, directed by Chun-Ku Lu.

Yin Tien-Chou (Max Mok) and his sister (Ching-Ching Yeung) are separated at birth due to their parents being killed by Tsing Yin (Leanne Lau), the leader of the Er Mei Clan, and her associate Monster Yu (Jason Pai) for trying to hide the location of the two blades known as the "Holy flames". Tien-Chou is rescued by someone known as You-ming Elder (Phillip Kwok), the sworn enemy of the two, who trains him to avenge his parents and find the first sword, both which were specifically made for a male and female, while Tsing Yin took the sister and trained her to be her disciple and pawn.

This is notably one of the last psychedelic-fantasy epics made by the Shaws at the beginning of the 80s after the success of The Battle Wizard (from 6 years earlier) released alongside (all in 1983, in fact!) a slew of similar crazy, visual-effects loaded martial arts films including Buddha's Palm, Descendant of the Sun and Demon of the Lute.

Holy Tropes of the Martial World: