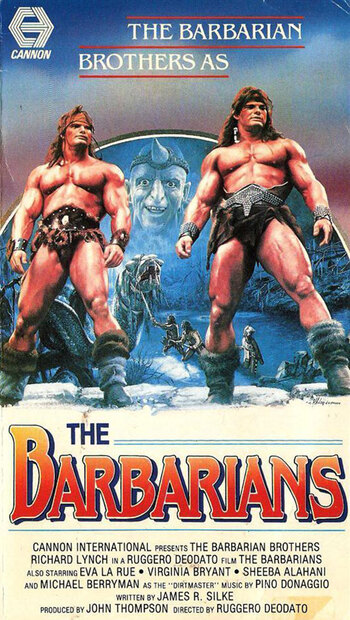 A Golan-Globus produced Sword and Sorcery fantasy film from 1987, directed by Ruggero Deodato (Cannibal Holocaust) and starring Peter and David Paul (credited as The Barbarian Brothers).

In darker times of magic and barbarians, travelling tribe of entertainers known as the Ragnis are assaulted by the warlord Kadar, who seeks the claim the immensely powerful belly ruby from their leader Canary. When the tribe is eventually surrounded, one of the two twin orphans that were adopted by the tribe bite two of his fingers off. Enraged, he is about to kill them but Canary pleads for their lives, promising herself to him to ensure their safety, and he vows not to kill them. Kadar instead places the boys into slavery, with a dastardly plan in his mind. Years later, now grown into muscular barbarians, the twins manage to escape and set out for a journey to restore the Ragnis to their former glory.