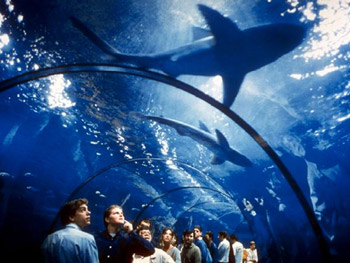 <Now, this is an interesting human concept,> Ax said approvingly. <This hologram makes it almost appear that we are under the water.>
"Ax? It's not a hologram," Rachel said.
<Then ... we are underwater? Protected only by badly made human plastic?>
"Yeah."
<Why do you humans do things like this?>
—Animorphs 15: The Escape
Advertisement:

A Video Game Setting consisting of an underwater tunnel with glass walls. Expect to see all sorts of fish and aquatic life on the other side of the glass. Actual sharks are common, but not required.

Truth in Television, as underwater tunnels are very popular features

in aquariums worldwide, and more often than not are actually stocked with a few reef sharks as part of the ecosystem in the tank the tunnel runs through.

These are especially common in Racing Games as a Justified Under the Sea race course.

Compare Under the Sea and Down the Drain.