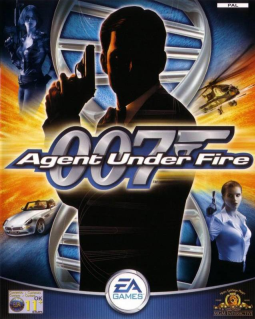 The world needs a hero and there is only one man for the job.
James Bond: One thing troubles me. How can I be sure you're the genuine article?
Zoe Nightshade: I intend to prove it to you.
James Bond: It seems we're going down.
Advertisement:

The One With… Andrew Bicknell as Bond.

James Bond 007 in... Agent Under Fire is a First-Person Shooter developed by Visceral Games (then EA Redwood Shores) and EA Canada and published by Electronic Arts in 2001.

Bond is sent to rescue CIA agent Zoe Nightshade which leads him onto the trail of a cloning plot headed by Adrian Malprave and Nigel Bloch.

Originally just one of the multiple versions of The World Is Not Enough, it became a new game retaining the same gameplay and id Tech 3 engine while also serving as the introduction of driving levels being featured alongside shooter levels.

Preceded by 007 Racing and followed by NightFire.