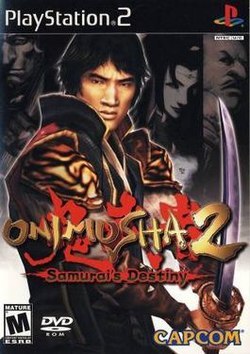 Onimusha 2: Samurai's Destiny is the second installment of the Onimusha series, released in May 2002 and acting as a sequel to Onimusha: Warlords.

After the events of the first game, Oda Nobunaga, the ruthless Daimyo, has taken control of the Genma and is now acting as the Demon King and using the demons to conquer Japan. Among the victims of Nobunaga's armies are the inhabitants of Yagyu Village, a village where some residents are descended from the Oni, the former arch enemies of the Genma. The Sole Survivor Juubei (Sekishusai) Yagyu arrives too late to save his companions, but discovers that he has the blood of the Oni clan in his veins, and thus the power to oppose the Genma and stop Nobunaga. After finding an Oni sword hidden in the village, he sets forth in a long quest across Japan to find the Five Orbs created by the Oni to protect mankind against the threat of the demons. Along the way, he crosses paths with four other warriors journeying through the land for their own reasons: Oyu, a beautiful and mysterious swordswoman, Ekei, a jolly Warrior Monk spearmaster who hides a dark secret, Magoichi, a skilled gunslinger and the leader of the Saiga-shu mercenaries, and Kotaro, a teenage ninja and the head of the Fuuma Ninja clan. With the aid of these warriors, Jubei searches for the Orbs, fighting Nobunaga's demonic lackeys every step of the way.

While the gameplay and controls are mostly untouched, the featured plot is much more vast, long and complex; you'll explore forests, towns, caverns, dungeons and castles as you proceed. There's also the complicated companion system which will determine the actions of the four major NPCs during the course of the game and can influence the story to an extent. This significantly adds to the replay value, as it's possible to have different events occurring on different play throughs, or to give focus to different characters and places. This system is controlled mainly by giving gifts to the four companions, as giving these gift items will raise (or, if it's not a proper gift, lower) the friendship score with that character. In return you'll possibly obtain items and treasures from them, open up different events, cutscenes, and sidequests, and finally determine which (or how many) of the four companion characters become playable during the course of the quest.

This game was eventually followed by Onimusha 3: Demon Siege, while the characters from this game (and others) are also playable in Onimusha Blade Warriors, and several are referred to (but do not actually appear) in Onimusha: Dawn of Dreams.