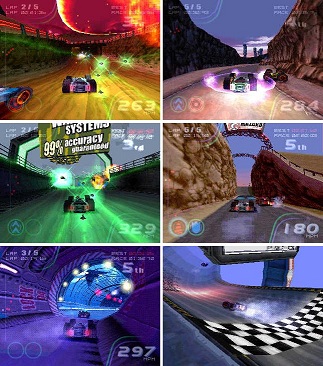 A futuristic racing game series (of the Vehicular Combat sort) developed by Attention To Detail in the late nineties and published by Psygnosis on the PlayStation and PC.

Unlike the Wipeout series, the vehicles involved are still cars and subject to gravity, they're just huge and built with wheels on their sides big enough for the car to continue to drive either way up. And they can move at insanely high speeds.

The tracks contained a lot of destroyable elements, including being able to bring down entire buildings onto the track. The high speeds of the cars also allowed them to drive on the ceilings of tunnels.

It was followed by a sequel, Rollcage Stage II, which discarded what little plot the original had in favor of more cars and tracks. It also added in a whole bunch of single and multiplayer mingames including a devious puzzle mode called Scramble with a look quite similar to TrackMania. Stage 2 also appeared on the PC, but under the name Death Track Racing for reasons never explained.

A Lighter and Softer version was later released called Firebugs. This was aimed at the newly emerged 'children given a PlayStation now that their older siblings have a PlayStation 2' market.

It never quite sold as well as it could've, thanks mainly to having to compete with Wipeout for advertising budget. Nobody really knows who owns the IP rights, but a Spiritual Successor made by two of the original devs entitled GRIP: Combat Racing is on Steam.

Recently, one of the original devs dug up the source code for the games and recompiled them for modern systems. You can download them here