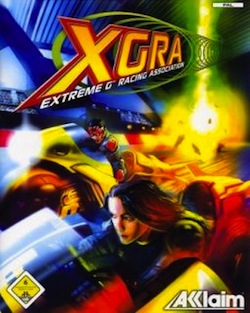 What happens when you take modern motorcycle racing and throw it into the future? According to Probe Studios, you get Extreme-G, a supersonic race to the finish on heavily armed rocket-powered hyperbikes.

The races are blindingly fast and put a lot of focus on weapons, which range from the bikes' built-in energy weapons that get recharged each lap, to the pick-ups that include missiles, mortars and a massive shockwave emitter. And some more odd things too.

The game has all the usual racing game modes, plus a couple of weapon focused ones: the single player Shoot 'em Up mode where players destroy moving targets over 3 laps of a track, and a multiplayer Battle mode where there's no track, just an enclosed arena and a lot of weapons.

And on top of all that, a pumping electronic soundtrack.