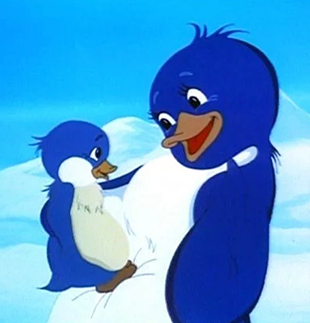 Penguins in fiction tend to be given attributes of ducks due to the historical unfamiliarity of penguins. Since penguins are both waterbirds and considered exotic to either writers and/or audiences, work creators tend to substitute in attributes from better-known, more familiar animals. Subtrope of Informed Species.
Advertisement:

that can be heard for miles, and is probably the most recognisable noise produced by any penguin species, while African penguins are nicknamed "jackass penguins" because their calls

sound remarkably like the braying of a donkey. Penguins in fiction also tend to have orange, flat webbed feet with no claws, much like a duck's feet.

In terms of Linnaean taxonomy, penguins and ducks are only together up until Aves, the class that all birds belong to. When you get to the next lowest classification, order, that's where they split. Ducks are in the order Anseriformes with other waterfowl like geese and swans, while penguins are in the order Sphenisciformes. In terms of cladistics, penguins and ducks are similarly very distant relatives; they are together up to the Neognathae infraclass, which contains all modern birds short of the most basal ones.note Ratites such as cassowaries, emus, kiwis, ostriches, rheas, and tinamous, all comprising the sister infraclass, Paleognathae. Their lineage split during the Late Cretaceous when non-avian dinosaurs still ruled the world. Millions of years ago. They are so long-diverged that ducks are more closely related to chickens than to penguins, and penguins are closer to albatrosses than to ducks.note For comparison, humans and tarsiers

(let alone monkeys, orangutans, gorillas, chimps, etc.) are closer cousins than ducks and penguins are; the primate suborder Haplorhini, which groups humans and tarsiers, arose millions of years after Pangalloanserae (which includes ducks) and Neoaves (which includes penguins) diversified away from each other. Nonetheless, a real-life animal did approach this trope: Bambolinetta,

a flightless wing-propelled duck occupying a similar niche to penguins.

This trope may be related to the fact that both penguins and ducks are often considered humorous.

Subtrope of Artistic License – Ornithology, Informed Species, Everything's Better with Penguins, and Cartoon Penguin. Compare All Flyers Are Birds, Zebras Are Just Striped Horses, White-Tailed Reindeer, and All Animals Are Dogs. May overlap with Flying Flightless Bird if the penguin is shown flying.