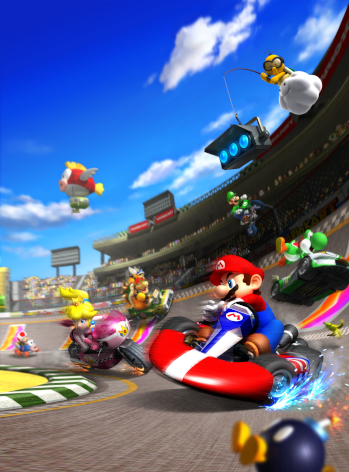 Now you too can withness the feeling of driving a car... without any rules!
The sixth installment of the Mario Kart series, Mario Kart Wii is an arcade-style Racing Game for the Wii, released worldwide in April of 2008. This game introduces motorbikes as a secondary form of vehicle, as well as a Tournament mode, which functions similar to the Mission mode from Mario Kart DS.
Advertisement:

The game is also notable for the improving upon the implementation of online multiplayer support present in the previous installment, focusing on versus and battle modes for up to twelve participants, and up to two players could connect and play from the same Wii console. Players could compete against random players from within the same region or from any continent, or could compete only against players registered as friends. At the end of each race or match, each player's VR (versus rating) or BR (battle rating) would change based on their final ranking. Mario Kart Wii also featured the "Mario Kart Channel", which was available as an optionally selectable channel on the Wii Menu, that presented current regional or worldwide rankings for Time Trials, and the option of sending or receiving ghost data via WiiConnect24.

It was the game to play on the Wii's online service, with one of the last ever games being a race of Mario Kart Wii. A third-party server; Wiimmfi

* Pronounced: Wii-m-F-eyeran by the eponymous Wiim, has taken upon himself to keep the servers up for this game, as well as other Wii games, meaning this game still has a niche online playerbase to this day.

CTGP Revolution, a Game Mod track pack with additional features that uses this game as a base, has its own page.